Review of Lest the Dew Rust Them by Michael Drakich 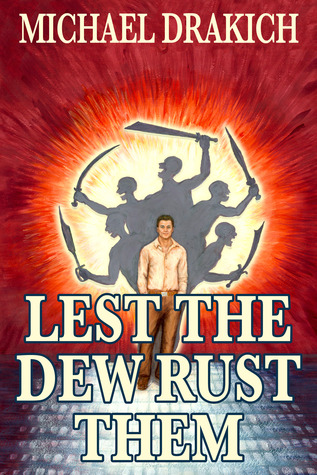 Synopsis: "Terrorism in America has a new game…decapitations!

Homeland Security Director Robert Grimmson faces the task of catching five men in New York City. They call themselves the Sword Masters with a single minded plan of terror through decapitations.
Barely has the task begun when a new arrival at JFK is a man importing thousands of swords! Alexander Suten-Mdjai is a trainer in the deadly art of swordsmanship and Robert cannot help but believe there is a connection between him and the Sword Masters.
As he goes about the task, each step in his search is made more difficult through the interference of politicians, the media and his own government.
Robert’s examination constantly draws him back to Alexander who regales him with a tale of swordsmanship from his lineage featuring events of mankind’s bloody past and often oddly having a connection to the case before him.
With the clock ticking as New York collapses into a deep panic, he must catch the Sword Masters before it is too late!"

My Review:   I have to say, for some reason I kept putting off reading this book but once I got into it I was completely sucked in. It did take a while to get all the characters straight as you were kind of thrown in the middle of things (even though it was actually the beginning). The book definitely drew you in and made you keep reading to find out what was next, for me the main storyline really took a back seat to the stories of the swords. I absolutely devoured those stories and actually went back to read a couple of them again. If you are looking for a modern thriller/suspense/crime/mystery with a twist this is definitely the book for you.
My Rating: It takes a bit to get all the moving parts straight but once it gets moving a really good book! I give it a rating of Four Paws!
Lest the Dew Rust was sent to me by the author for an honest review.
You can find out more about Michael and his work on his Goodreads Page or Blog.
You can also obtain your own copy of Lest the Dew Rust Them in digital or print format on Amazon or Barnes & Noble