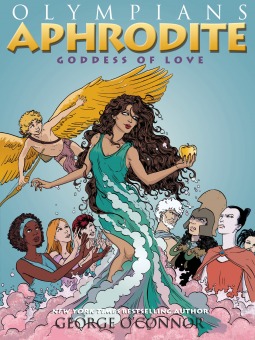 Synopsis: "In volume six of Olympians, graphic novel author/artist George O'Connor turns the spotlight on Aphrodite, the goddess of love. Look for the same thoroughly researched and wonderfully accessible comics storytelling as O'Connor tackles the story of the Aphrodite from her dramatic birth (emerging from sea-foam) to her role in the Trojan War."

My Review: I really enjoyed this Graphic Novel, it might be the best of the series. I thought I knew Aphrodite, and this novel does cover the classic myth of the competition for the most beautiful goddess, but I also learned some new things about her. The artwork of course is beautiful, and while she doesn't look the way many other artists have depicted her, I appreciated the different take.
My Rating: I really enjoyed this one, according to goodreads this is the last in the series, but goodness I hope not! I really enjoyed the whole series and especially this one.  I give it a rating of Four Paws!

Bedtime Story: Once Upon a Memory by Nina Laden 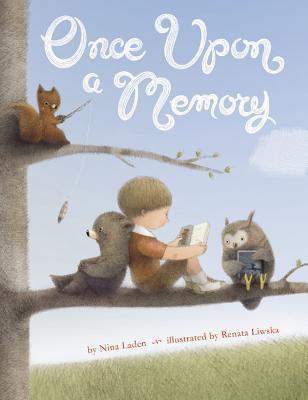 Synopsis: "When a feather drifts through a child's window, a magical journey begins. As the boy follows the feather, he is swept away to a world filled with adorable animals, where fantasy and reality come together in surprising and playful ways. From the cake that once was grain to the ocean that once was rain, whimsical "before" and "after" scenes offer readers a peek at the world as seen through the eyes of a curious child, ultimately asking the question, "What will you remember?"


Nina Laden's poetic and cleverly woven text is perfectly paired with bestselling artist Renata Liwska's captivating illustrations. Together they create a story that will keep readers enchanted long after the journey has ended."

My Review: This is probably the best book I have read so far this year (after reading 177 so far in 2014). The illustrations have a soft almost colored pencil look to them and are absolutely adorable. The thoughts on the page are so simple yet bring about a lot of deep thought. It is a wonderful, lulling story to read for bedtime that will stick with you for days.
My Rating: I highly recommend this book whether you have kids or not! Go get it!! I give it a rating of Four Paw and a Stump Wag!!
Good Night! Sweet Dreams!

After Dark Review of Beg by C.D. Reiss 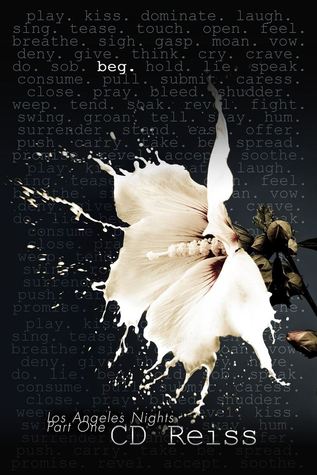 Synopsis: "My name is Monica. I’m a singer born and raised in Los Angeles.
I’ve stopped dating. When I cut a record, or win a Grammy, maybe then I’ll be with someone, but every man in my past has done everything he could to make me submit myself to him, and it’s gotten in the way of my career. I won’t do it again.

But there’s Jonathan. He owns the high-rise hotel where I work, and he is gorgeous and charming. I refuse to fall in love with him, even though when he asks me to submit to him, I want nothing more.

My Review: I found the premise of this book interesting, but it fell a little short and was pretty choppy. The characters would begin developing but then they would do or say something that almost felt out of the character they had already developed. I did enjoy the scene at the lounge where Monica confronted Jonathan with another woman, that was funny. The steamy scenes were definitely steamy. I really just read this book instead of being engrossed in the book. It is still up in the air as to whether I will continue with the series.
My Review: I really just almost skimmed this book, I wasn't involved in the story line or characters. It was a good book to fill the time but that was about it.  I give it a rating of Two Paws.﻿
Posted by Angela at 11:00 PM No comments:

Review of The Stork Reality by Malena Lott 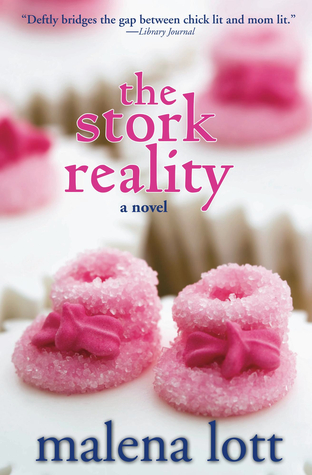 What to expect when you’re expecting? For a career-driven couple that didn’t plan on having children, it’s a nine-month roller coaster ride.

Creative director Taylor Montgomery gets the surprise of her life when she finds out she’s pregnant the same day her best friend, Hilarie, finds out she’s not. Taylor never wanted to be a mom, but it’s all Hilarie has dreamed about. The Stork Reality: Secrets from the Underbelly updates the original novel about the journey to motherhood and how pregnancy changes marriage, work, and even close friendships.

Taylor experiences the stork reality as she maneuvers the wild new world of moms-to-be and comes to terms with what it means to be a family.

This humorous, poignant novel will appeal to women and moms in all stages and celebrates that no two pregnancies, moms or approaches to motherhood are the same."


My Review: I didn't enjoy this one as much as I expected, normally I love what Lott puts out there. Maybe because I definitely over the being pregnant and baby thing. I felt like this book did a lot of rambling with not much of an end point. I didn't connect with the main characters but did enjoy Allen, I felt like he was the only one that had a personality. I did like how she portrayed the fact that a woman's life doesn't have to end after having a baby like is often believed and pushed. Maybe this book will give some hope to someone who is just discovered they are expecting, but it just didn't work for me.
My Rating: I was so sad not to have enjoyed this one. I really wanted to but it just lacked an emotional connection for me.  I give it a rating of Two Paws.

Review of A Wizard Named Nell by Jackie French Koller 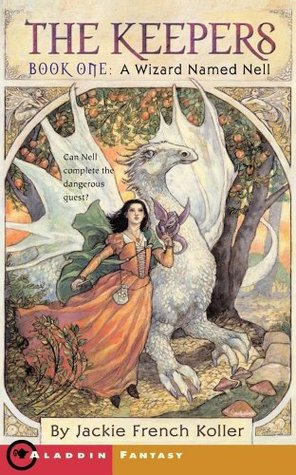 Synopsis: " the magical world of Eldearth, Witches and Wizards live side by side with Humans, Weefolk, though elusive, are abundant, and Dragons and Unicorns still walk the land. But the present Imperial Wizard, Keeper of the Light that protects Eldearth, is aging and ill. If a new apprentice is not found soon, Eldearth may succumb to the evil powers of the dark Lord Graieconn. There is a long tradition in Eldearth that the keeper must be a Wizard, and only boys can be Wizards, but so far, all the boys who have attempted the difficult quest to become Apprentice Keeper have failed. Time is running out.
Princess Arenelle, a promising young Witch, has just reached eleven, the age of Magic, and wishes to undertake the quest. Her father, King Einar, forbids it, fearing for her safety and claiming that her heart is too soft. Against the King's wishes, Nell sets out into the unknown with her pet demidragon, Minna. Aided by Folk she meets along the way and an albino Dragon that she rescues from near death, Nell battles the fearsome forces of nature, Evil, and ignorance that are amassed against her. It will require all of her strength, cunning, and courage to defeat them. Does Nell have what it takes to become the next Apprentice Keeper?"


My Review: This is a great middle grade fantasy, thought it is definitely geared more towards girls but boys could also enjoy the adventure portions of it. It plays off a lot of familiar themes in fantasy and contains the classic good versus evil storyline. I have noticed that one thing I dislike about fantasy novels is the similarity in the names of the 'big evil force' and the 'big good force' and they always seem to be unpronounceable, kind of irritating. I also noticed in this book there were several made up words in the beginning (and were kindly defined in the footnotes of the page) but that really tapered off through the rest of the book so it seemed kind of pointless. Those minor issues aside I really enjoyed the book, it was quick reading and a fun story with all the elements I look forward to in a fantasy. I enjoy where the story is going and plan to continue reading the series.
My Rating: I really enjoyed this book but really doubt I will give it to munchkin to read since it is so clearly geared towards girls.  I give it a rating of Three Paws and a Stump Wag.

What's for Dinner is a little insight into my life for you every Monday night. I carefully plan out meals for the week ahead of time and do my shopping over the weekend.  So I wanted to start sharing with you one of the recipes or dinners I am most looking forward to each week.
Several weeks ago I picked up a couple of cookbooks so Munchkin could start getting involved in the kitchen more. This one seemed perfect since he is so into Sesame Street right now. 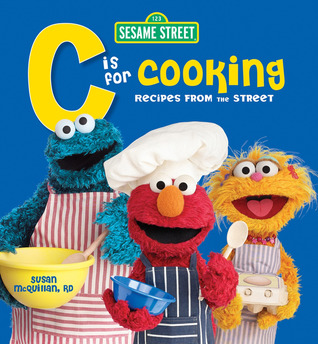 For our first recipe we picked out Grover's Little & Adorable Chicken Nuggets
It is a simple recipe that we had most of the ingredients for (and those we didn't have we had easy substitutes).  Unfortunately, Munchkin was not in the mood to help that day and only wanted to eat the crackers instead of smashing them like he usually does when I want him to eat, go figure.

So I just whipped them up and they were surprisingly good, even hubby who often doesn't like things like this really liked them (I think it was the mustard combined with the mayo that gave them a nice zip).

Email ThisBlogThis!Share to TwitterShare to FacebookShare to Pinterest
Labels: Food, Whats for Dinner

Interesting Tidbits from the Web:

So it was Shark Week last week, and that resulted in almost no reading for me, which I guess is okay considering how much I have read this year, I just hate to let that momentum slide.  This week is going to be another slow week since I am setting up for Munchkin's second birthday on Saturday! Holy cow! Can you believe it has already been two years?!  I have let a few things fall between the cracks recently, I missed the last two weeks of Whats for Dinner posts, but no worries I have one all set for tonight!  I also haven't been crafting as much lately, I am going to blame it on the fact that it is summer!

So all that said, I will be trying to keep up with things around here but the next several weeks are going to be a little busy for me.

I hope you have all been having wonderfully fun reading adventures.
Posted by Angela at 8:00 AM 2 comments: