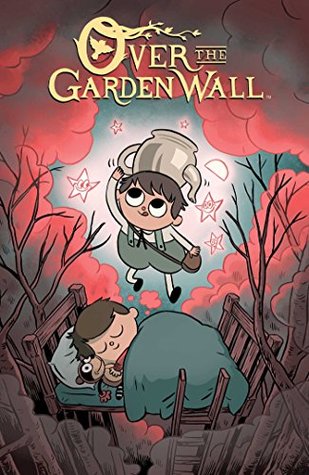 Synopsis: "journey home in a style reminiscent of The Wind in the Willows and Sleepy Hollow.

Return to the Unknown with new Over The Garden Wall stories that expand the world of the Emmy Award-winning Cartoon Network series.
Writer and artist Jim Campbell spins a tale that follows Greg and Jason Funderburker as they traverse the Unknown and find new friends along the way. Meanwhile, the Woodsman’s daughter Anna, wanders alone in the Unknown after her father is tricked by the Beast. Written by Amalia Levari with artist Cara McGee—find out how Anna learned to survive on her own as she starts her journey to save her father before his fate is sealed. Both of these stories are something no Over The Garden fan will want to miss!"


My Review: I happened to pick this up at a sale not too long ago, Munchkin was done shopping so I just grabbed something and this happened to be it. I found it to be really kind of obscure. It has a series of little adventures but they don't seem to be in any sort of timeline or sequence (if you know me you know I like chronological order). The stories strike me as folk tales along the lines of Boy Who Cried Wolf but with an Alice in Wonderland obscure twist. The art was also a little odd, and I believe it is along the lines of Adventuretime, but I have never seen that show or gotten into that fandom at all. This might be a great ones for those fans but it really just didn't suit me, just a little too out there for my liking.

My Rating: I must admit that maybe it wasn't the best idea to just pick up something random. This definitely wasn't the one for me either in story line or in illustrations. I give it a rating of Two Paws.

Not a Bedtime Story: The Beastly Pirates by John Kelly 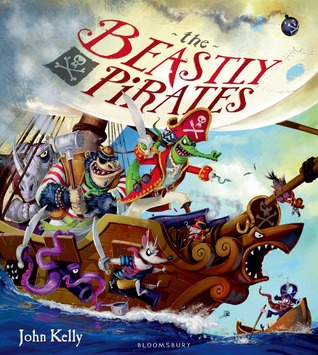 Read for: Children's Book Challenge & received in a Subscription box

Synopsis: "They're called The Beastly Pirates
and this fearsome ugly bunch
scour the seas for other pirates
they can gobble up for lunch.

Beware THE BEASTLY PIRATES – the scariest sailors on the seven seas.
They're a cutlass-toting, pirate-eating bunch of renegades and the list of their dastardly deeds is endless. Dare you come to face to face with this motley crew?

WARNING: This is most certainly NOT a book for bedtime . . . unless you like your pirates with a bit more bite! Perfect for fans of Jonny Duddle."


My Review: Munchkin received this in either a subscription box or as a gift and just pulled it off the shelf. Of course I failed to notice the warning that it is not a bedtime book, and it definitely wasn't though thankfully we didn't have any nightmares. This is one that is more appropriate for older children as it is rather dark and gruesome with talk of eating pirates and the horrible ways to do so. Though the subject is a little creepy, the rhyming was fantastic and the words just roll off the tongue in a smooth pirate song kind of way. Again this is better for older kids who can distinguish fiction from reality and best not read before bed.

My Rating: This was definitely not a great one for bedtime but I can really appreciate the difficulty of making up these rhymes.  With that said, Munchkin isn't really into pirates and definitely not into scary so this wasn't the book for us.  We give it a rating of Two Paws and a Stump Wag. 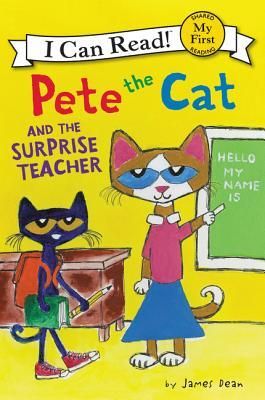 Read for: Early Reader Challenge & we love Pete the Cat

Synopsis: "New York Times bestselling author and artist James Dean brings readers in for a big school surprise in Pete the Cat and the Surprise Teacher.

When Pete goes to school, he finds out his teacher is out sick and the substitute teacher is . . . his mom! It’s up to Pete to teach the teacher what school is all about.

Pete the Cat and the Surprise Teacher is a My First I Can Read book, which means it’s perfect for shared reading with a child."My Review: Pete the Cat had quite a surprise at school! It is a very good early reader, very simple sentences and short text on the pages. It also shows a lot about different classes in school like art, gym and music that may get young readers excited to go. While it wasn't our favorite Pete the Cat book it was still a very good one.

My Rating: Another great book for Pete the Cat lovers as they grow older.  It wasn't our favorite one, maybe because Munchkin isn't in a real school yet but it was still very good, we give it a rating of Three Paws and a Stump Wag.
Posted by Angela at 11:08 AM No comments:

Review of Sword and Verse by Kathy MacMillan 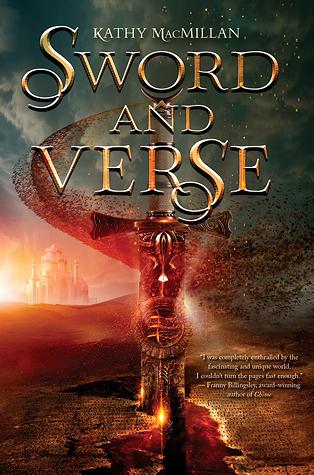 Read for: TBR & the cover is stunning

Synopsis: "Raisa was only a child when she was kidnapped and enslaved in Qilara. Forced to serve in the palace of the King, she’s endured hunger, abuse, and the harrowing fear of discovery. Everyone knows that Raisa is Arnath, but not that she is a Learned One, a part of an Arnath group educated in higher order symbols. In Qilara, this language is so fiercely protected that only the King, the Prince, and Tutors are allowed to know it. So when the current Tutor-in-training is executed for sharing the guarded language with slaves and Raisa is chosen to replace her, Raisa knows that, although she may have a privileged position among slaves, any slipup could mean death.

That would be challenging enough, but training alongside Prince Mati could be her real undoing. And when a romance blossoms between them, she’s suddenly filled with a dangerous hope for something she never before thought possible: more. Then she’s approached by the Resistance—an underground army of slaves—to help liberate the Arnath people. Joining the Resistance could mean freeing her people…but she’d also be aiding in the war against her beloved, an honorable man she knows wants to help the slaves.

Working against the one she loves—and a palace full of deadly political renegades—has some heady consequences. As Raisa struggles with what’s right, she unwittingly uncovers a secret that the Qilarites have long since buried…one that, unlocked, could bring the current world order to its knees.

And Raisa is the one holding the key."My Review: This was a complete cover by for me about a year ago, granted the synopsis did sound interesting as well. For being a completely fantasy world, belief system and culture it was a pretty easy book to read. The world building was nicely done though not very detailed. I found it interesting to read this after The Reader where books didn't exist, and in this book writing is forbidden except for the elite. I liked the integration of the story of the Gods in with the story, it helped give the world building a boost as well as make sense of the storyline. I was expecting a little more depth to the story but it mostly focused on the relationship between Raisa and Mati. We do get to see the development of the resistance and the role Raisa plays as well as the writing. I did find that this would be a great stand alone fantasy book, but there is another one expected out some time next year. While I enjoyed the characters and the story I think the conclusion is so nicely wrapped up, even with some open ends that you can decide for yourself.

My Rating: While this was a good fantasy, it did have a pretty complex world and system and it really didn't get moving until pretty late in the story. It does in my opinion read best as a stand alone. I don't know if a lot of readers would have the patience to push through 2/3 of the book  for the pace to pick up.  I give it a rating of Two Paws and a Stump Wag.

Books Added to Shelves This Month
Beauty and the Beast by Gabrielle-Suzanne Barbot de Villeneuve
Fantastic Beasts and Where to Find Them by JK Rowling
Samurai Rising by Pamela Turner
Dawn Study by Maria V. Snyder
The Princess Diarist by Carrie Fisher
Name of the Wind by Patrick Rothfuss
Saga Vol. 7 by Brian K. Vaughan
The Hundredth Queen by Emily R. King
A Court of Wings and Ruin by Sarah J. Maas
Seduced by the Billionaire by Carly Carson
The Simplicity of Cider by Amy E. Reichert

It doesn't seem like much reading based on my numbers from last week but it was really a great reading week for me! I am so close to being done with the Harry Potter series, I can almost taste it.  I have given myself some motivation in that I can't pick up ACOWAR until it is done. Even with all that reading I also got a lot done at work and around the house.  We have been working on our basement a lot at home, we had to install 2 new windows, put up sheetrock and paint. This next weekend we will be able to finish painting, mount some cabinets and finish cleaning and purging the basement.
These next couple of weeks are going to be very busy for us, Hubby and I celebrate our 10th anniversary this weekend, my Mother -in-law's birthday and of course father's day too.  It is also both my nieces birthdays over these two weeks, Munchkin finishes up his last games of TBall and graduates Pre-K!

Gosh I can't believe how time is flying! I hope this week is a good one for you and that the work days fly by for you too!


Oh and don't forget to enter my giveaway for the whole Rocky Mountain Search and Rescue Series by Katie Ruggle HERE
Posted by Angela at 9:50 AM 2 comments: