A story about a woman, recently divorced and returned to her home town to figure out what is next. She encounters an old friend and spends a weekend with him and his daughters. Feelings that are long since buried are rising up again, but are her recent loss and his current life going to stand in the way of their happily ever after?

Other Works in Progress:
Tamlyn Marie's Grace - 12,072 words
Think Cinderella only with a matchmaker ;)

So the next poem is
Sonnet 18 by William Shakespeare
The title link with take you to the poem
Shall I compare thee to a summer's day?
I don't know if I am just in a pessimistic mood today or what because I honestly am not struck with this poem. I know it is one of the most popular of love poems and is on Valentine's cards, Wedding cards and Anniversary cards. I really don't get the feel of why it is a love poem other than loving the person's beauty, but you don't know what that beauty is. I also don't that surge of feeling that you get when reading something to do with love and think about your own loved ones.  I have to say I am definitely more partial to Shakespeare's plays as opposed to his poems.
Posted by Angela at 3:08 PM No comments:

Its Monday, What are you Reading?

I decided to join in this meme for my sanity and your own to keep track of what books have bookmarks in them!

I have a few weeks to catch up on here! I read a ton while we were out of power and didn't get a chance to review everything (heck I don't even know if I have them all listed!).

What I Read Last Week:
Links will take you to my review
A Road Not Taken by Robert Frost
Grampa-Lop by Stephen Cosgrove
How Do I Love Thee? by Elizabeth Barrett Browning
The Secret Garden by Frances Hodgson Burnett
Hearts Aflame by Johanna Lindsey
The Tale of Despereaux by Kate DiCamillo
Dangerous Desire by Diane Escalera
Bloodmaiden by Christine E. Schulze
Heart of a Knight by Barbara Samuel
Wild Hearts by Susan Mallery (no review)
Virgin Slave, Barbarian King by Louise Allen (no review)
Dusty Britches by Marcia Lynn McClure (no review)
Currently Reading:
Wildwing by Emily Whitman - HC - on page 35 of 359
The Thief Lord by Cornelia Funke - PB - on page 18 of 348
A Clash of Kings by George RR Martin - on my Nook, page 20 of 1439
Snow Flower and the Secret Fan by Lisa See - PB - on page 23 of 269
Next Books to be Read:
Catundra by Stephen Cosgrove - Childrens/Bedtime stories
Holes by Lewis Sachar - Middle Reader/ 2011 Challenge
Sabriel by Garth Nix - YA/ 2011 Challenge
Sonnet 18 by Shakespeare - Poetry/ 2011 Challenge
Miss Peregrine's Home for Peculiar Children by Ransom Riggs - Rhodie Readers Book Club
Posted by Angela at 1:35 PM 2 comments:

Review of Heart of a Knight by Barbara Samuel 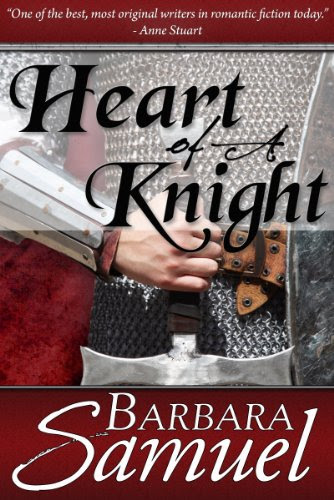 Synopsis: "Lady Elizabeth D'Auvers returns to her beloved home, Woodell Castle, after a self-imposed exile to save herself and her stepchildren from the plague sweeping Britain. Afraid that she will find death and ruin, she is relieved to discover that her castlefolk and lands have thrived in her absence due to the presence of Lord Thomas of Roxburgh. Lord Thomas's great physical size is equaled only by the size of his heart, and his kindness and care for her people earn him the Lady's gratitude. But Elizabeth soon feels much more for Thomas than gratefulness, for desire and passion draw her to the dark, mysterious knight. Thomas, too, is powerfully attracted to the beautiful Lady, but the secrets he keeps may destroy their chance at happiness and bring about his own death."

My Review: Another beautifully written book by Barbara Samuel. I aboslutely love her descriptions, it paints such an amazing picture you can almost look around you and see the scene playing out. The characters were well thought out and even the sub-characters were well developed. It did seem like there was a little too much pushing and pulling in the middle that caused a little lull but it was nice to see the little things that cause love to grow. The ending is such a rush of nervous excitment that you can't pull your eyes away from the page.
My Rating: I really enjoyed reading this one, though it did seem a little slow at times and is definitely longer than most romance novels I have read, but it was beautifully written and put together.  I give Heart of a Knight a rating of Three Paws and a Stump Wag!
﻿
Posted by Angela at 12:25 PM No comments: