Review of Bookish and the Beast by Ashley Poston

Read for: Recently Added/ 2020 Anticipated Release
Previous Books in the Series:
Geekerella
Princess and the Fangirl
Synopsis: "In the third book in Ashley Poston's Once Upon a Con series, Beauty and the Beast is retold in the beloved Starfield universe.
Rosie Thorne is feeling stuck—on her college application essays, in her small town, and on that mysterious General Sond cosplayer she met at ExcelsiCon. Most of all, she’s stuck in her grief over her mother’s death. Her only solace was her late mother’s library of rare Starfield novels, but even that disappeared when they sold it to pay off hospital bills.
On the other hand, Vance Reigns has been Hollywood royalty for as long as he can remember—with all the privilege and scrutiny that entails. When a tabloid scandal catches up to him, he's forced to hide out somewhere the paparazzi would never expect to find him: Small Town USA. At least there’s a library in the house. Too bad he doesn’t read.
When Rosie and Vance’s paths collide and a rare book is accidentally destroyed, Rosie finds herself working to repay the debt. And while most Starfield superfans would jump at the chance to work in close proximity to the Vance Reigns, Rosie has discovered something about Vance: he’s a jerk, and she can’t stand him. The feeling is mutual.
But as Vance and Rosie begrudgingly get to know each other, their careful masks come off—and they may just find that there’s more risk in shutting each other out than in opening their hearts."
My Review: As always, Ashley Poston knocked it out of the park with this one. I do kind of wish I had re-read the previous books before starting this one as it took me a bit to remember all the characters from them (they did only play minor roles but they are there). I loved the Beauty and the Beast elements in this story, but with a modern twist. The side characters were amazing! I want Quinn to get their own short story! Oh and Space Dad & Elias, I need to know what happens between them. I did really love Rosie, she was a great character, quirky and quiet yet knows what she doesn't want and isn't afraid to speak up. Vance was a great 'beast' with a lot of inner turmoil, I loved his development throughout the book. Even though I have not been a fan of most contemporary YA, I will always read Postons!!
My Rating: Once again I thoroughly enjoyed this book, it was a single day read for me and it just makes me smile.  "Amara Up" is my new favorite saying.  I can't help but give this one a Four Paw Rating!
Posted by Angela at 9:40 AM No comments:

Blog Tour & Review of Where Dreams Descend by Janella Angeles

Read for: Anticipated Release/ Requested Reviews/Blog Tour
Synopsis: "In a city covered in ice and ruin, a group of magicians face off in a daring game of magical feats to find the next headliner of the Conquering Circus, only to find themselves under the threat of an unseen danger striking behind the scenes.
As each act becomes more and more risky and the number of missing magicians piles up, three are forced to reckon with their secrets before the darkness comes for them next.
The Star: Kallia, a powerful showgirl out to prove she’s the best no matter the cost
The Master: Jack, the enigmatic keeper of the club, and more than one lie told
The Magician: Demarco, the brooding judge with a dark past he can no longer hide
Where Dreams Descend is the startling and romantic first book in Janella Angeles’ debut Kingdom of Cards fantasy duology where magic is both celebrated and feared, and no heart is left unscathed."
My Review: I was really intrigued by the synopsis of this one and was excited to read it. Admittedly, while I did enjoy Phantom of the Opera and Moulin Rouge movies, I am not one who has watched them repeatedly. While I think it is a pretty accurate description of this book, it is definitely its own thing. I really enjoyed the dark and mysterious atmosphere and vibe of the book. With that said though, the world building lacked a bit for me, things were left a little to mysterious for my liking. A lot of the questions I had about just the world itself were still left unanswered at the end of the book. This is the first book in a duology and I am hoping that things will become a bit more clear in the second book. It is also a very slow paced book, while there is a bit of action, most of it is over in a flash. I got the impression that while this book has a story arc, it still have the feel of simply setting the stage for the second book. With all the smoke and mirrors throughout the book, I was also very disconnected with the characters. I don't feel like I ever really got to know any of them, nor was I really routing for them. It was a solid debut book, but I am really hoping for a bit more development and growth in the second book.
My Rating: I am thinking that maybe I am missing something with this book. It was slow and tedious to get through but it feels like there is something more to it than what I read.  I was left with so many questions but I don't think all of it was intended.  I am really in the middle on this one and give it a rating of Two Paws and a Stump Wag.
I received a complimentary copy of this book from the publisher via Netgalley.  The above is my honest review and opinion. 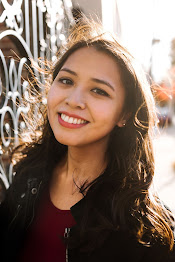 JANELLA ANGELES is a Filipino-American author who got her start in writing through consuming glorious amounts of fanfiction at a young age—which eventually led to penning a few of her own, and later on, creating original stories from her imagination. A lifelong lover of books, she's lucky enough to be working in the business of publishing them on top of writing them. She currently resides in Massachusetts, where she's most likely to be found listening to musicals on repeat and daydreaming too much for her own good. Where Dreams Descend is her first book.
Goodreads ~ Website ~ Twitter ~ Instagram
Where Dreams Descend was just released today, so you can obtain your own copy in print or digital format now from Amazon, Barnes & Noble, directly from Macmillan or request it at your local library or bookstore.
Posted by Angela at 3:28 PM No comments:

Books Added to Shelves Recently: TBR
The Eyes of Tamburah (gift)
The Wolf in the Whale
~~~~~~~~~~March Birthday Waiver Books ~~~~~~~~~~~~~
The Rain Dragon Rescue
The Order of the Unicorn
#Frankenstein - READ
All the Wandering Light
Life on the Leash
Phoenix Unbound
You Can't F*ck Up Your Kids  (gift)
Mary Shelley Monster Hunter Vol. 1
The Caged Queen
The Mum Who'd Had Enough
The Voyage to Magical North
I Needed a Viking
The Overdue Life of Amy Byler
~~~~~~~~~~~~~~~~~~~~~~End Birthday Waiver~~~~~~~~~~~~~~~~~~~~~~~
Red Hood (gift)
Scavenge the Stars
Beefcakes
Hades & Persephone
Red, White & Royal Blue
Dark Skies
No Country for Old Gnomes (gift)
About That Kiss
The Ranger of Marzanna
A Heart of Blood and Ashes (gift) - READ
The Girl and the Stars
A Choir of Lies
Loving Cara
This Will Kill That
Woven in Moonlight
Girl of Fire & Thorns (gift)
Murder Past Due
Books Can Be Deceiving - READ
Due or Die - READ
Book Line and Sinker - READ
Apple Cider Slaying - READ
All My Loving
Fury of a Phoenix
Homicide in Hardcover (gift)
Unravel the Dusk
Ruthless Gods
Mexican Gothic
Happy and You Know It - READ
Flirtasaurus - READ
At Wolf Ranch (gift) - READ
A Touch of Stone and Snow (gift)
Bookish and the Beast - READ
A Thief Among the Trees
Tooth and Claw
The Librarian of Auschwitz
Ember and the Ice Dragons
~~~~~~~~~~~~~~~~~~~~~~~~~~~~~~~~~~~~~~~~~~~~~~~~~~~~


Wow! What a reading week!! And to think it was complete chaos at home and at the office preparing for a weekend away.  But a lot of audio books and some really good books that captured my attention pushed me all the way.  Also a long car ride to our weekend destination and a cabin in the woods with no TV, internet or cellphone signal made for some great reading time!
While you are reading this, we are our way home from a much needed weekend away.  I will be back at it tomorrow morning with writing and posting reviews.  I am super happy with the progress I have made with getting caught up on requested reviews and new purchases.  I still have a ways to go but have made a lot of progress on getting those reviews up.
Posted by Angela at 8:00 AM No comments: