Synopsis: "Zale. Gauthier. Varden. These three dynasties...They all sound like something out of an ancient, oriental myth or fairy tale. The concept of humans and dragons helping and living in harmony with one another, without fear. To me, that's exactly what they are. A distant dream only read of, whispered secretly, quietly yearned for. For, you see, I am the new Quelda of Tynan.
These words echo the mystery, horror, and romance found within Schulze's fantasy novel. Along with her new husband, Chalom, Crislin must choose to embrace cruel tradition, run from it, or stand against it. The young couple's only hope is to rally the help of the three peaceful dragon dynasties of Sulaimon—but tradition is not on their side, even outside the realm of Tynan. The dragons outside Tynan's borders have been rumored as too stubborn and proud to believe their Tynanian brothers would commit such horrors as inflicted upon the Quelda. Gaining their aid is not a likely hope. Yet, any hope at all is valued in Tynan...
If they are to stand a chance of bringing cruel tradition to a permanent end, Crislin and Chalom must brave the constant, consuming blizzards of the Ever-white. They must brave the three dynasties and the challenges awaiting there. Together, they must convince the dragon emperors to allow them access to the shrines which house the sacred Aria - protective strands of music which may be able to disperse the evil from Tynan and unite the four dynasties of Sulaimon as a whole once again. Their only aid stems from a sprite whose moods are as unstable as her magic, a young minstrel, and a mysterious fox. Despite the odds, such plans are daring, dangerous, unprecedented, but fully possible - if they can escape the Wall first."

My Review: Let me first start by saying I loved the 1st person narration! Its not very often I enjoy books with first person, but this really fit the book. Next let me say that it is like so many other fantasy and quest stories but yet still so unlike that it really holds you in. Christine really does a great job of painting the images in your mind as well as making you feel the emotions of the characters. I really did enjoy the characters, granted I would have loved to have Chalom be more involved in the story, I didn't get as much of a feel for him as I would have liked (don't get me wrong, I love him, I just want more of him). It was a great fantasy quest to tag along for, and not quite the ending I was expecting. There were a few surprises throughout the story that really kept you on your toes. Another great book from Christine Schulze!
My Rating: This one gets Four Paws from me! I really enjoyed it an hope there is more to come!
**Note: The ebook version of this was sent to me by the author for review.
Posted by Angela at 10:15 PM No comments:

Review of The Tale of Despereaux by Kate DiCamillo

Synopsis: "The adventures of Desperaux Tilling, a small mouse of unusual talents, the princess that he loves, the servant girl who longs to be a princess, and a devious rat determined to bring them all to ruin."

My Review: This was a fun book to read. Even though there were dark parts and not so pleasant things happening, the narration was still kept light. I really like the story telling type voice that was used when Kate DiCamillo wrote this one. The story moved a long quickly and sucked you in; however for some reason I didn't really connect with any of the characters as strongly as I normally do. After finishing it though I did crave soup hahaha!
My Rating: I really enjoyed reading about Despereaux and think that it was written well for middle grade readers. Even adults can enjoy it.  So I give it a rating of Three Paws and a Stump Wag.
Posted by Angela at 2:18 PM No comments:

Synopsis: "Sienna Diaz is desperate to find her missing beagle, no matter what it costs. She hires Cruz Santino, the best-and hottest-in the business. He's an ex cop, dangerous on many levels, which comes in handy when all evidence indicates her beloved pet was snatched to use in a dogfighting ring.

Cruz will do whatever it takes to find Sienna's lost pet, but he also wants results from the smokin' hot attraction between them-and he isn't above breaking his own hands-off-clients rule to get there. However, until he brings her beloved beagle home safely, he won't have Sienna's undivided attention...and affection."

My Review: I won this on a Badass Book Review blog giveaway and must thank Erika so much and Diane Escalera as well for sending me this book! I loved Dangerous Desire. I could relate to the characters well, with their love of dogs. I really enjoyed the banter between the characters, especially Tori she was a great sub-character! And good gordy, Cruz! What a hottie, everything a woman could ever want and of course Sienna is what every woman wishes she could be! I really enjoyed reading about a dog fighting ring being busted, I know it's fiction but it still feels good. There were only a few little hiccups that distracted from the book, for example I didn't see the point of her loosing her job, except to gain more sympathy also it seemed a little fast for their relationship to grow over a single weekend, I did however like seeing the realistic conflict between Cruz and Sienna after the moment of crisis. All in all though it was a great book, a fast read and very entertaining, I couldn't put it down!
My Rating:  I really enjoyed Dangerous Desire and can't wait to read more from Diane! I give this one Four Paws!
Posted by Angela at 9:15 AM No comments: 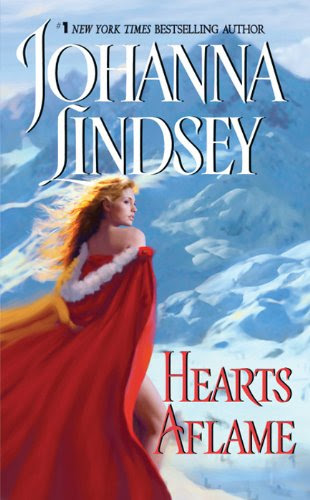 Synopsis: "Kristen Haardrad met the icy fury in her captor's crystal-green gaze with defiance. She was the prisoner of Royce of Wyndhurst, but his slave she'd never be. This powerful Saxon lord had at last met his match in the Viking beauty - his equal in pride, in strength...and in the fierce, hot hunger of insatiable desire. But Kristen could not know the torment that divided his soul; how he ached to hold her soft, supple body, thirsted for the ringing joy of her laughter - yet hated her for an ancient crime that was not her own.

But her golden loveliness drives him mad with desire, her fiery eyes taunting him, compelling him to claim her. Until, in wordless surrender, they cast aside the shackles of doubt and distrust to unite forever in the searing promise of all-consuming love"

My Review: So I have something to confess to, I have a major soft spot when it comes to Vikings and Norsemen and Norsewomen! I absolutely loved this book! Kristen is such a strong woman, doesn't show weakness and makes those in charge feel like they are in charge even though she is really calling the shots. I also loved all of her friends and family, it was great to see those close family bonds. Royce, wow what to say about Royce, I enjoyed reading his character and really fell for him even with his rough and hateful exterior. I really enjoyed the little spats between Kristen and Royce, you could feel the hatred yet attraction through their interactions. Granted it was an ending you would expect but you still loved every minute of the tale.
My Rating: This was an exciting book that I couldn't put down so I give it a rating of Three Paws and a Stump Wag!﻿
Posted by Angela at 10:15 PM No comments:

Review of The Secret Garden by Frances Hodgson Burnett

A story about a woman, recently divorced and returned to her home town to figure out what is next. She encounters an old friend and spends a weekend with him and his daughters. Feelings that are long since buried are rising up again, but are her recent loss and his current life going to stand in the way of their happily ever after?

I cam so close to finishing on time for the Nanocamp! If I hadn't lost power because of Irene then maybe I would have, but oh well, we have another Nano coming up soon enough. So for now I am going to continue working on this story as well as some of the others I have started and begin planning for this years Nano!


Other Works in Progress:
Tamlyn Marie's Grace - 12,072 words
Think Cinderella only with a matchmaker ;)