Review of The Reader by Traci Chee (and a little chat)

Please hang with me on this one, it is a long review but for good reason!

Read for: TBR Book
Synopsis: "Once there was, and one day there will be. This is the beginning of every story.

Sefia lives her life on the run. After her father is viciously murdered, she flees to the forest with her aunt Nin, the only person left she can trust. They survive in the wilderness together, hunting and stealing what they need, forever looking over their shoulders for new threats. But when Nin is kidnapped, Sefia is suddenly on her own, with no way to know who’s taken Nin or where she is. Her only clue is a strange rectangular object that once belonged to her father left behind, something she comes to realize is a book.

Though reading is unheard of in Sefia’s world, she slowly learns, unearthing the book’s closely guarded secrets, which may be the key to Nin’s disappearance and discovering what really happened the day her father was killed. With no time to lose, and the unexpected help of swashbuckling pirates and an enigmatic stranger, Sefia sets out on a dangerous journey to rescue her aunt, using the book as her guide. In the end, she discovers what the book had been trying to tell her all along: Nothing is as it seems, and the end of her story is only the beginning."

My Review: So I purchased this book back when everyone was getting so hyped up for it's release, but then I really didn't seen too many reviews and the ones I did see were not all that positive so I put this on the backburner. I finally was drawn in again by the beautiful cover and picked it up. I am so glad I did too, this turned out to be right up my alley. So much thought and detail went into not only the story but the actual production of this book. First let me talk about the book itself, the cover has so many details and subtle hints as to the story, then it has deckled edges, then on the inside it has a variety of formats, with images and handwriting, etc., a beautiful map detailing the world and finally there is a hidden message too! Now into the story itself, I went in a little blind know that it was set in the equivalent of a eastern culture type world but without any written language or reading, but the main character has something we know is a book (but she doesn't know what it is), oh and there is some kind of magic too. It takes a bit to get into the story, and I don't suggest listening to the audio book unless you are following along in the book at first. There is a lot of world building, but it is very nicely done, woven into the story and some discovered as the characters discover it. What I was not expecting was that this book would have so many pirates! I was really surprised to find that not only is this a fantasy book about books but also a pirate story. There are so many elements in this book that are so carefully woven together, parts of 'the book' are even integrated into the story. It is all so beautifully orchestrated. The characters are also fantastic, they are well rounded, diverse, realistic and easily to connect with and care for throughout the story. Archer is by far my favorite character, so unique and powerful and he develops so much along side Sefia. Now Sefia is also a great character, she doesn't always make the best decisions but she learns quickly and develops well throughout the story, I look forward to seeing where things take her and what she does. They are the two main characters but there as so many other wonderful supporting and side characters, all of who add something to the story. With all of this said, I would not suggest this book for everyone. It is definitely in the realm of high fantasy and all the world building and complexities of the storylines may leave some readers unhappy or bored, but if you are a fan of high fantasy don't hesitate to pick this one up, it is so unique and I can't wait to see where the rest of this series leads!
My Rating: It took a bit to get into this book because there is a lot of world building (and I tried an audio book first- just don't do that, this is one that needs to be read), but it was so worth it to stick with the book. I really think that this book is a little misunderstood, the synopsis doesn't do a great job and people go in thinking this is going to be a fun fantasy book.  Don't get me wrong, it is a fun fantasy book but it is high fantasy which requires a lot of development. It isn't super straight forward, there will be times where something will seem pointless or confusing but if you just keep moving forward it will come back around and make total sense (there are even some elements I am not sure of but I am certain there was a purpose in future books because all the elements are so carefully thought out so far). This book was definitely a Four Paw book for me!
A Little Chat: I really am kind of wondering what happened with this book, there was so much hype for it at the beginning, even it's own publisher made book tag going around on Youtube, but now after being published almost 9 months ago there are less than 1,000 reviews and only about 3,000 ratings. (I went back to check other debut/ first book in series that were published in the same month - Three Dark Crowns has nearly 4,000 reviews & 17,000 ratings). Is it because this synopsis doesn't really give a proper view, or was it because of some eh reviews right at the beginning?  This is a plot driven (but still with great characters) high fantasy novel, I think when people hear YA high fantasy they think Sarah J. Maas & Throne of Glass, which while it does still fit in the high fantasy realm is really a straight forward wham bang thank you  ma'am type fantasy.  I wonder if we have traveled so far away from sweeping, epic high fantasy that it isn't appreciated so much when you have to really take your time with a book to allow it to develop and settle.  Anyway, just my two cents and I will stop now because this is probably my longest single book review to date!

Books Added to Shelves This Month
Beauty and the Beast by Gabrielle-Suzanne Barbot de Villeneuve
Fantastic Beasts and Where to Find Them by JK Rowling
Samurai Rising by Pamela Turner
Dawn Study by Maria V. Snyder
The Princess Diarist by Carrie Fisher
Name of the Wind by Patrick Rothfuss
Saga Vol. 7 by Brian K. Vaughan
Over the Garden Wall by Jim Campbell, et. al.
The Hundredth Queen by Emily R. King
A Court of Wings and Ruin by Sarah J. Maas
On His Watch by Katie Ruggle
In Safe Hands by Katie Ruggle
After the End by Katie Ruggle
Seduced by the Billionaire by Carly Carson
The Simplicity of Cider by Amy E. Reichert

I ended up getting a little sucked into a series this last week, I purchased and read all of the Rocky Mountain Search and Rescue books by Katie Ruggle.  For some reason as the weather warms up, I move away from fantasy and read more romance and this series certainly fit that bill!  I also FINALLY finished the 6th Harry Potter book, just one more to go!! I think I may take a little break from it and try to pick it up again in late June or July.

This week my folks have come for a visit and while we have a lot planned, I do hope to read at least a few books (and I may be able to squeeze in a little trip to the book store), thankfully my mom is also a reader so I think I can manage.  I do have posts lined up for the week so I can catch you up on a bunch of the books I have been reading over the past couple of months.

Email ThisBlogThis!Share to TwitterShare to FacebookShare to Pinterest
Labels: Monday, Weekly update, What are you reading

Crafty Times is a new thing I am trying on the blog where I can share some of the art and crafts I have created (you can too of course). I really dabble in a wide variety of crafts and hope you can find something that sparks your interest or inspires you!
It has been a while since I posted any crafts, that is because I haven't had much time to create anything.  I have instead been organizing and purging my craft supplies. It has come to my attention that they have been taking over our basement, so I have started to try to contain the beast.  Clearly I am not a seamstress and want to focus on the paper crafting.  Anyway, I have made a few cards since February and wanted to show them to you.
I tried out a card kit box, it was coffee and tea themed and so cute. These were the cards I made from that kit. 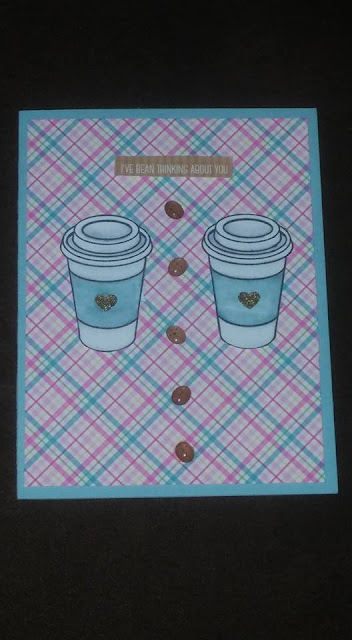 "I've Bean Thinking About You" 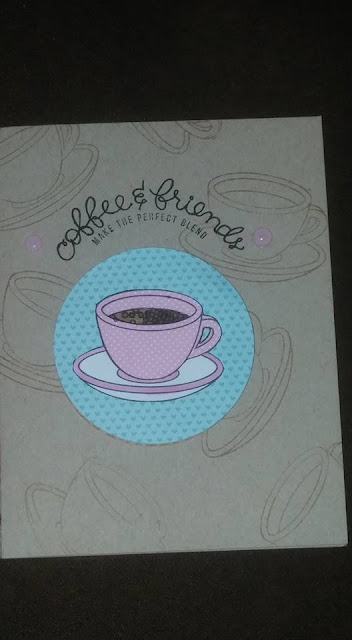 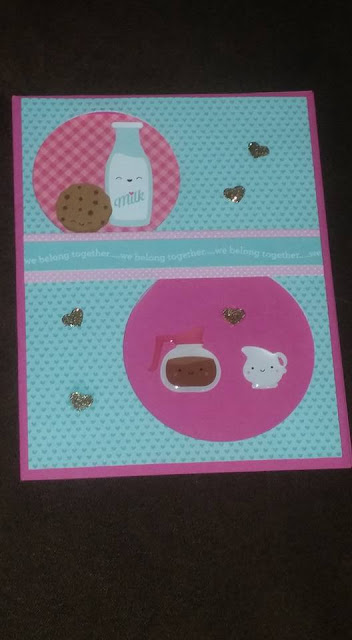 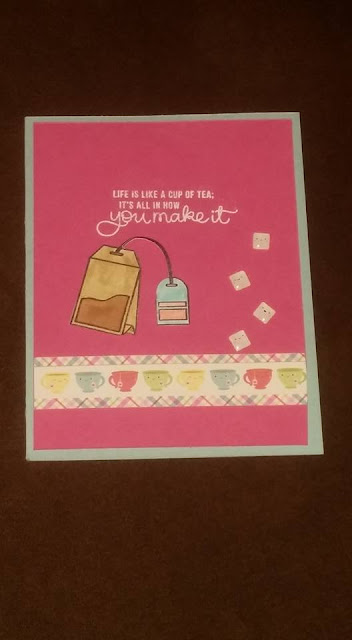 Life is like a cup of tea; it's all in how you make it 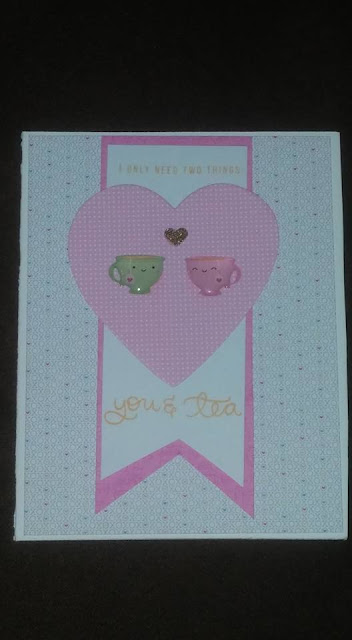 I Only Need Two Things: You & Tea


I then tried out a card kit from another company and while it was a great value, I have only made one card from the kit. 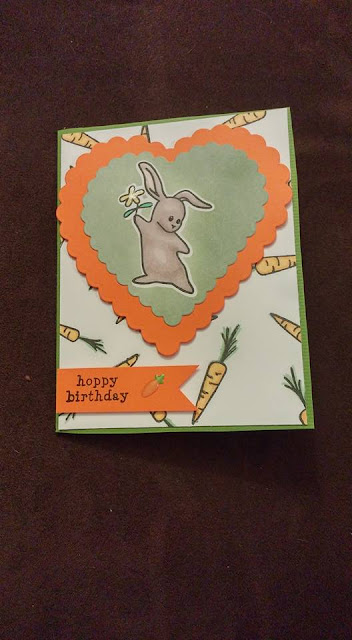 A little Hoppy Birthday card I made for my mom.
And last but not least I just wanted to play around with a background technique I saw online.  I sent one of these to my Sister-in-law who just started a new job. 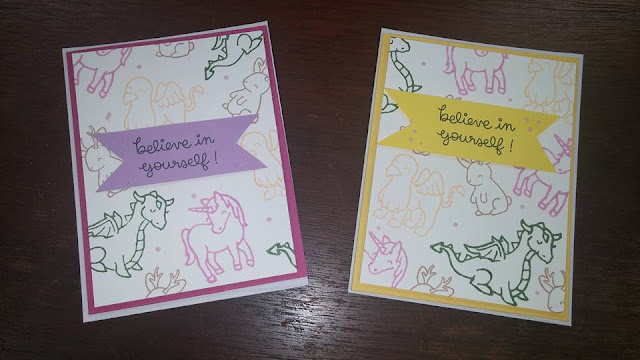 So not a lot of crafty time going on here but I am nearly done organizing my supplies, hopefully by the end of next week I will be done and ready to create.  On a side note, I will not be selling on Etsy at this time due to their new payment rules. If you are unaware, Etsy is requiring all sellers to accept all forms of payment (including paypal, direct credit card/debit card transactions) linking up to your verified checking account.  Now I do not have a separate business checking account for these cards, as it just a hobby that I like to share and maybe have a little extra income. I used to only accept paypal and would let it sit there until I either spent it or had enough worth transferring. I do not feel comfortable linking up to my personal account and risk dishonest people having charge backs on accounts. So for now until I can find another place to list, I will only be selling in local consignment and bazaars. I will also work with individuals if there is something someone wants or needs (feel free to email me).  Okay, so now I will end that little rant/plug.
﻿
Posted by Angela at 8:00 AM 2 comments: