So I am a little behind schedule but I really hope you are enjoying this month long feature of Rhode Island Authors.  This evening I am here to share an interview with Rich Feitelberg, the author of the Aglaril Cycle fantasy series (see my review of the second book, Vorn the Onyx from yesterday) and a collection of short stories, Magic and Melee.  I have a great giveaway for you after the interview so make sure you enter!
Ang: How did you come up with the name Aglaril Cycle? And the names of the gems?

Rich: Using the Elvish Dictionary based on Tolkien's Middle Earth I constructed the name Aglaril.  The idea of Cycle was influenced by poetry, as the books could be considered a prose version of poetry written by James Claymont, the story's bard.  I don't remember exactly where all the gem names came from, some are from the Elvish Dictionary, others I made up and others were more than likely a combination of terms and translations.

Ang: There are several main characters in your books, is it difficult to keep them all straight when you are writing? Do you have a favorite character to write?

Rich: It really isn't difficult for me to keep them straight, as you have pointed out in your reviews and our chats that each of them are very different.  They are all individuals with unique personalities and backgrounds. Brashani is one of my favorites to write, he has so much in his past and is a very developed character.  I also really enjoy Evan, he was one of the first characters I created for this series.  Honestly, I don't really dislike writing any of them, they each have their own story and their own purpose for being involved.

Ang: How many books can we expect to complete this series, or will it be an ongoing series? I saw several stories about Brashani on your blog, will they be released as a novella for the series or is there potential for a branch off series?

Rich: There will be 8 total books in this series.  I don't want to give too much away but I have ideas for other books in the same world, not the same storyline or necessarily the same characters but the same world. Brashani has a lot of background to him, there are several stories that need to be resolved.  His short stories won't be put to print until after the series is complete, it is still in the back of my mind but the main focus is on the 8 books of the Aglaril Cycle.

Ang: What do you think makes your series different for other fantasy books and series out there?

Rich: The characters definitely make this series unique.  I like to describe the series as being Faulkner meets Fantasy.  There are real life issues that people face every day even in our modern world.  I believe that the characters I created for this story could be just as easily placed in a modern or contemporary story and be the same people they are in this book (with out the magic).

Ang: I understand that you have drafted most or all of the books for this series, what has been the best part of having so much written in advance? What difficulties have you faced? Has the series been progressing the way you had initially planned or have those pesky characters thrown a wrench in things?

Rich: I think the best thing about having so much written and planned already is that it really benefits the continuity of the series.  I can look at the later books and then compare to the earlier books and add in any necessary foreshadowing or plot points to get everyone where I need them to go. There is a lot of work to do ahead of releasing one of the books, I have to make sure all the timelines throughout the whole series are matching up as characters and plotlines part ways and come back together.  No whole plot lines have been thrown out, but some are modified and embellished to fill out the story and develop the characters. So with having so much planned I have a lot more control on how the story moves along.

Ang: I see that you also write poetry, do you have any collections published?

Rich: I do, the title is Paraphernalia in my Pocket. (link will be included) It includes a wide range of poems on love, nature, death, and several other subjects.

Ang: Where is your favorite or most productive place to write?

Rich: When I am working on writing, it is always at my desk on my computer.  However, when I am editing, it depends on what stage I'm at with the book. I might print out pages to take with me and edit on the go or I might make comments electronically on my kindle or ipad as I read in bed.

Ang: How do you celebrate accomplishing getting a book published and out to the readers? Or do you just jump right back into the writing, editing and revising process?

Rich: I usually just jump right back into the work, there are readers out there waiting for the next book to come out.  I do however celebrate new reviews being posted! And the better the review, the more I celebrate.


Thank you so much to Rich for taking the time for this interview!  You can find out more about Rich and his works on Goodreads Page or Website. 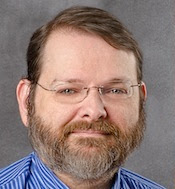 Rich Feitelberg is a poet and novelist. In addition to the books in his popular fantasy series, the Aglaril Cycle, Rich has several collections of short stories and poems, available from this web site and fine booksellers worldwide.
Rich has a Bachelor of Arts in English from Worcester State College. His Master of Arts in Technical Communication was received at Bowling Green State University. Currently, Rich is working on the Aglaril Cycle and writing more poems and short stories.


You can also contact and follow Rich Feitelberg on Twitter @Feitelberg or on Facebook.
Now I have a great giveaway for you with not one but two prizes!  The first prize is a signed copy of Aure the Topaz, the first book in the Aglaril Cycle.  Second prize includes signed book plate/cards of both Aure the Topaz and Vorn the Onyx, as well as an onyx keychain. 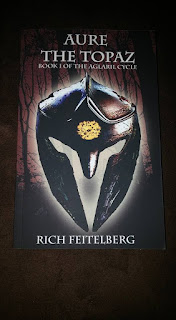 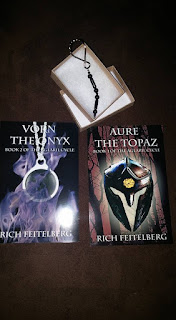 Of course with anything else we have rules
~You must be 18 or older to enter (though there is nothing adult included)
~Enter the giveaway via the below Rafflecopter methods
~This is open internationally too (any incurred customs fees are your responsibility)
~Giveaway ends midnight on the 29th, winners will be announced the next day (I will be contacting you via email after the announcement for shipping information)

a Rafflecopter giveaway ﻿
Posted by Angela at 10:09 PM