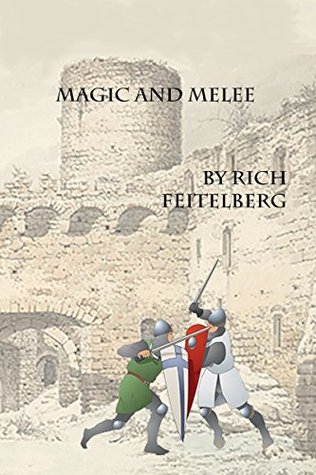 Synopsis: "A collection of six fantasy short stories from the mind of Rich Feitelberg, author of the Aglaril Cycle. Included in this collection are:

The Last of Her Kind, Asbith, the mother of all dragons, has lived hundreds of years and been a mother to countless generations of her kind. Then humans began to encroach upon the land and Asbith watched her children die, one by one, as the newcomers used dragon combat to prove their heroism and bravery. Now, she is the only dragon left and the humans continue to creep forward into her land and still seek battle with the great lizards to test their mettle. Tired of the long struggle, Asbith is anger and wants revenge for her slain children. Can she stop the humans or is she too old to succeed?

Knight Training, Shard, a half-orc, has had to fight hatred and bigotry all his life just to become a squire. But now in the training yard of the Michaeline order as he spars against another squire, he learns a most devastating truth. One he would not have guessed, but one that will change his life forever.

Chamomile Flowers, Laura comes to the small village of Abbotsdale to observe a strange and local festival. Her natural curiosity leads her to discover the site of the grand ceremony which ends the festival. Can she escape without notice or is she doomed to fall into the clutches of the villagers and suffer whenever punishment they can devise?

Horn of Horundring, Merchant Wilson Kray has come to Breezy Bluff to purchase the Horn of Horundring from the air spirit that owns it, Twex Oolung. But Twex is a known prankster and has no need of money, which is all Wilson can offer. Is the merchant's trek pointless or can he purchase the Horn from Twex without suffering the fate of all who come and have dealings with the dreaded air spirit?

Curses, The necromancer Jormundan is hired to help a wealthy man named Smith correct a ritual that went horribly wrong and turned him into a living skeleton. Smith believes the error was no accident and wants Jormundan to find the traitor too. Can the wizard correct the mistakes that were made and locate the traitor before it is too late?

The Cloax, James, an apprentice sage, wants to be a bard, but his father disapproves. So he runs away to his grandmother's home, halfway across the kingdom, only to discover something that will change his life forever."

My Review: You never know what you are going to get when you purchase a collection of short stories, but this book did not disappoint. It captures your attention and interest right off the bat with the story from a dragon's point of view and it doesn't let up throughout the whole book. It is filled with stories with a wide variety of characters. There are also a few of the stories that are potential tie-ins to the author's Aglaril Cycle series. If you are looking for some short fantasy stories that will fit into your time schedule and still leave you satisfied, definitely consider this book.
My Rating: This is a great collection of short fantasy stories, a way to try an author and see if you like the writing style, or test a new genre. I also love the way this book compliments the series by the same author as well (intentional or otherwise).  I give it a rating of Four Paws.
I met Rich Feitelberg a couple of years ago at a Rhode Island Author Expo when I picked up his book Aure the Topaz (which I featured last year), I am now a big fan of his work and am happy to share not only this book with you this year but also book 2 in his Aglaril Cycle tomorrow and an interview after that.  If you would like to find out more before then please visit his Goodreads Page or Website.
You can obtain your own digital copy of Magic & Melee on Amazon or Barnes and Noble.