What is the Super Bowl by Dina Anastasio 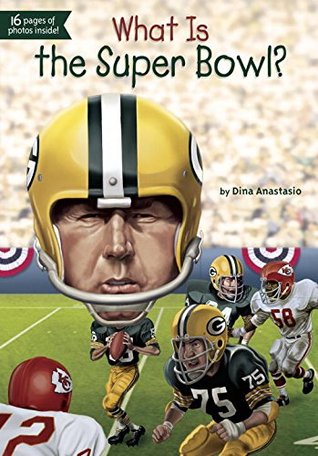 Read for: Mount TBR Print and because it's Football Time!
Synopsis: "With over 110 million viewers every year, the Super Bowl is one of the most watched television events in the United States. The final showdown between the two best football teams in the NFL attracts some of the biggest musicians to perform at the half-time show. But the Super Bowl is more than just a spectacle – it’s a high-stakes game to win the championship and claim a place in history. Go back in time and relive all the magic from years past – from excruciating fumbles to game winning plays."

My Review: I have been a football fan as long as I can remember and I have read several books about the sport. This one was actually a very good read even as a fan and an adult. It is set up as an early chapter book but can be enjoyed by any fan. It was very informative, gives clear definitions even if you aren't familiar with the sport, and has pictures throughout. It focuses a lot on the early history of the Super Bowl and gives a briefer over view of the more recent history of the game. There are also brief sections about individuals or plays that had an impact on the game. This a great book with great information for young readers and old, fans and non-fans alike.
My Rating: This was both an enjoyable read and informative read. Great for those young football fans and those who are trying to learn more about loved ones' interests.  I give it a rating of Four Paws!
Hope you all have a safe and fun time watching the Panthers face the Broncos tonight!