Review of The Fighting Ground by Avi 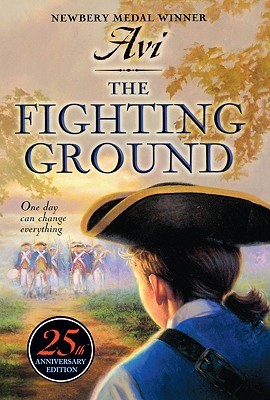 Read for: Audio Challenge, Across the States & Mount TBR
Synopsis: "Jonathan, 13, knows he's ready to fight the British. He can handle a gun. And he yearns to don a uniform and battle for glory, just like his brother and cousin. So on this day when the tavern bell tolls, calling men to arms, Jonathan doesn't ask his father's permission. He simply goes. And to his joy, he's accepted.

In the next twenty-four hours, Jonathan learns what it means to fight, and to be a soldier. He also learns what it's like to meet death face to face.

It's a lesson he will never forget..."

My Review: This book packs quite a punch as you follow Jonathan on a single day during the revolutionary war. He is so eager to fight but you see what a single battle does to open his eyes to the true costs of war and the ugly results. While this takes place so many years ago I think it still has a lot of standing today and still carries an important message.
My Rating: This was an interesting story and I am glad I was able to listen to it on audio.  It was only three hours which fit perfectly into my schedule. I give it a rating of Three Paws.