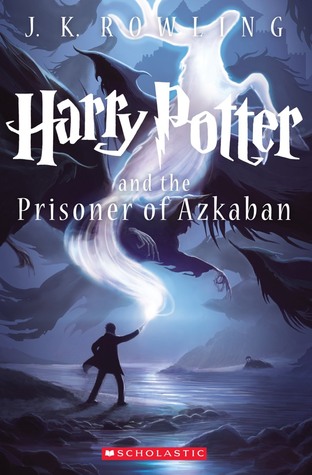 Synopsis: "For twelve long years, the dread fortress of Azkaban held an infamous prisoner named Sirius Black. Convicted of killing thirteen people with a single curse, he was said to be the heir apparent to the Dark Lord, Voldemort.

Now he has escaped, leaving only two clues as to where he might be headed: Harry Potter’s defeat of You-Know-Who was Black’s downfall as well. And the Azkaban guards heard Black muttering in his sleep, “He’s at Hogwarts… he’s at Hogwarts.”

Harry Potter isn’t safe, not even within the walls of his magical school, surrounded by his friends. Because on top of it all, there may be a traitor in their midst."

My Review: After the absolute torture of reading the first two books earlier this year I really put off continuing the series until now. I was rather surprised when I started reading this one, instead of having to force myself to read a chapter a night, I found it very easy to read 3 or 4 in a sitting. I find it very odd that after such dry narration in the first two with lagging storylines that this one seems to pop with activity, almost as if there is a different author writing it. I still am not a fan of any of the main characters, Harry, Hermione or Ron, but of course Dumbledore and Hagrid are still fantastic and the addition of Black and Lupin made for much more enjoyable characters to drive the story along. And while I have heard this is the best of the series I have new hope for the rest of series.
My Rating: I was rather surprised at the change between this book and the previous two in the series.  I understand there is a lot of world building with fantasy books but that doesn't explain how horrible the first two were.  I am glad that the series picked up with this book and can only hope it continues in the same manner.  I give it a rating of Three Paws and a Stump Wag.