Review of A Fool Among Fools by John Terracuso 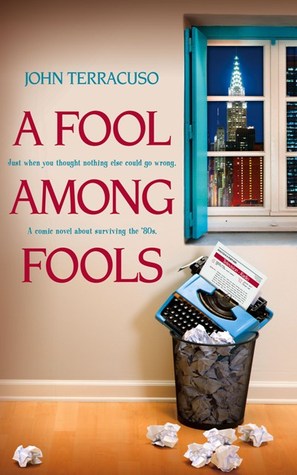 Synopsis: "It's 1986. Ronald Reagan is in the White House, Molly Ringwald is on the cover of Time and 29-year-old Michael Gregoretti is a struggling, underpaid copywriter at a big New York ad agency. He'd rather be writing plays; instead, he's writing awful commercials for a moisturizer formulated to conquer that dire, life-threatening condition: handruff.

Michael reluctantly accepts an assignment on a brand-new (and very secret) product – an aerosol butter – hoping it will lead to the kind of work that will land him a better job at another agency. But there's a catch: Working on this new account will also mean working for the rigid, compulsive and quite possibly insane Gwen Hammond, who thinks that Michael, with his off-the-wall ideas and unconventional campaigns, is just too much of a rebel to work with such a conservative client.

To further complicate life, Michael meets and falls for Craig Connolly, an absolute dreamboat from the South with a voice like FM radio and a face to match. Craig claims he'd like to be in a relationship and Michael wants to believe it. The problem is, Craig is already married – to his job.

Michael survives it all with the help of his two best friends: Irene Lucca, a witty book editor with a flair for vintage clothing and an eye for the art director Michael works with, and Anthony DeLorenzo, Michael's wise (and wisecracking) roommate and staunchest supporter.

By the time A Fool Among Fools ends, Michael has battled stuffy clients and stifling supervisors, written and produced what just might be the worst commercials in the history of advertising, found and lost love, and managed to keep himself – and the reader – laughing along the way."

My Review: This was a little outside my normal reading genres, but when the author contacted me for a review I thought it would be a fun, snarky book to read for a change. It really struck me as almost a Seinfeld style humor, finding the comedy in the everyday moments. There were times that the story kind of went a little slow but then you would catch a bit of humor that you could totally relate to your life (and then you start to sound like a lunatic because you are laughing so hard about something so simple). I missed a lot of the movie and actor/actresses and they didn't add to the story for me. That said, I still thoroughly enjoyed the characters and their interactions. I really loved the ending by the way.
My Rating: This was definitely outside my comfort zone but it did give me some laughs, though some of the references went over my head.  I give this one a rating of Three Paws.
A Fool Among Fools was sent to me by the Author for an honest review.
You can find out more about Mr. Terracuso and his work on his Goodreads Page.
You can also obtain your own copy of A Fool Among Fools in digital format at Barnes & Noble.