Review of Flame of Olympus by Kate O'Hearn 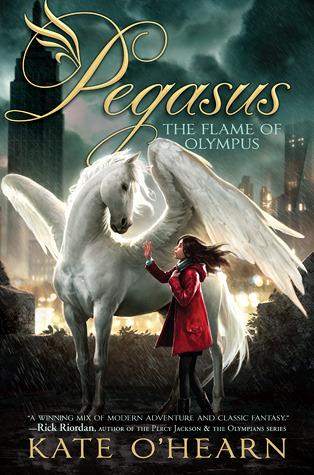 Synopsis: "A young girl, a winged horse, and a war of epic proportions make for an adventurous start to an exciting new trilogy.

When Pegasus crashes onto a Manhattan roof during a terrible storm, Emily's life changes forever. Suddenly allied with a winged horse she'd always thought was mythical, Emily is thrust into the center of a fierce battle between the Roman gods and a terrifying race of multiarmed stone warriors called the Nirads. Emily must team up with a thief named Paelen, the goddess Diana, and a boy named Joel in order to return Pegasus to Olympus and rescue the gods from a certain death.

Along the way, Emily and her companions will fight monsters, run from a government agency that is prepared to dissect Pegasus, and even fly above the Manhattan skyline-all as part of a quest to save Olympus before time runs out."

My Review: While I was having trouble settling into a book, I picked this one up off my TBR shelf and it hit the spot. I could not stop reading it! I loved the fantasy, myths, and adventure all wrapped into modern day New York City. The characters developed beautifully and I ended up falling in love with them. I really enjoyed how Pegasus became such a big character himself. The story line felt so new and refreshing. It would be fun for young adult guys and girls to read, there is plenty of adventure and fantasy for all. I loved this so much that the morning after finishing it I went out and purchased the next book in the trilogy (and happened to see the third just came out but couldn't get it this time).
My Rating: This was such a breath of fresh air for me, when my reading was starting to lag this book was that spark to get things going again. I loved the storyline and the characters and am looking forward to the next book. I give it a rating of Four Paws and a Stump Wag!