Review of One Boy, No Water by Lehua Parker 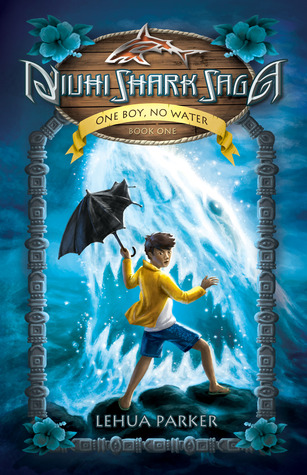 Synopsis: "11 year old Alexander Kaonakai Westin—Zader for short—is allergic to water. One drop on his skin sears like white-hot lava. Too bad a lifetime of carrying an umbrella and staying away from the beach isn’t the answer, especially when his popular almost twin brother Jay looks destined to become the next Hawaiian surfing sensation.

But avoiding water is just the tip of Zader’s troubles. Eating raw seafood and rare meat gives him strange dreams about a young girl in a red cape and nightmares about a man with too many teeth. There’s also the school bullies who want to make Zader their personal punching bag, the pressure of getting into Ridgemont Academy, and the mysterious yearly presents from his birth family that nobody talks about.

It’s enough to drive Zader crazy, especially when he suspects old Uncle Kahana and ‘Ilima know a secret that explains his unusual biological quirks. After all, they were the ones who found him newborn and abandoned on a reef and brought him to the Westins to adopt. Uncle Kahana swears Zader is ‘ohana—family—by blood as well as adoption. Too bad he’s not saying more.

When Jay quits surfing after a shark scare, Zader decides it’s time to stop hiding in the shadows and start searching for answers.

Growing up adopted in Hawai‘i just got a little weirder."

My Review: This was a very interesting and unusual book. I had some difficulty with the writing and language (it is written in Pigdin which from my understanding is almost like a Hawaiian dialect) but with some persistence it got easier to read. With that said though, this was such a unique story with some fantastic characters that you can't help but be drawn into the story and the mystery. I think that once Munchkin reaches this reading level (many years from now) he will absolutely love this adventure. The characters in this book are so rich that you really wish you could be friends with them, I love Uncle Kahana and Jay sounds like the best brother one could ask for and of course you can't forget Ilima who may be a dog but she has some very human quirks.
My Rating: I must say I have a really difficult time reading books that use dialects (I really really hated Huck Finn) or slang, maybe because it makes me slow down and actually read each word. Other than the difficulty of getting use to reading Pigdin, this was a great story. It had some really unique elements in it.  I give it a rating of Three Paws and a Stump Wag.
One Boy, No Water was sent to me by the author's Publicist for an honest review.
You can find out more about Lehua Parker and the Niuhi Shark Saga on her Goodreads Page or her Website.
You can also obtain your own copy in print or digital formats on Amazon or Barnes and Noble.