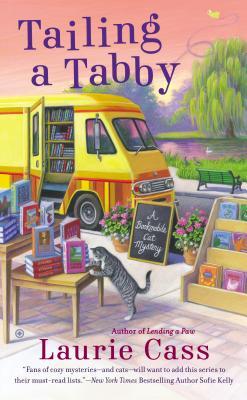 Read for: Borrowed Books/ Audio Books & Enjoying the series
Previous Books in Series:
Lending a Paw
Synopsis: "In the bookmobile, librarian Minnie Hamilton and her rescue cat, Eddie, roll out great summer reads to folks all over the lake town of Chilson, Michigan. And when real-life drama turns deadly, Minnie makes sure justice is never overdue.
The bookmobile is making its usual rounds when Minnie and Eddie are flagged down by a woman in distress. The woman’s husband, a famous artist, needs emergency medical care. After getting him into the bookmobile, Minnie races the man to the hospital in time…but his bad luck has only just begun.
After disappearing from the hospital, the artist is discovered slumped over the body of a murdered woman. Minnie knows that her new friend didn’t commit the crime, but the evidence paints an unflattering picture. Now this librarian and her furry friend have to put the investigation in high gear and catch the real killer before someone else checks out."
My Review: The first book in this series was what began my interest in Cozy Mysteries but I think I took too long to get back to this book. It took me a while to place all the characters again. I also found that it took quite a while to build up to the mystery part and it didn't feel like much time was spent on it. I would possibly read this series just for the book mobile and small town personality contemporary type book but the mystery part just felt disjointed for me. As I said it may have been because I took too long between books, so I am going to give it another shot and try to get then next book from the library in the very near future.
My Rating: I really struggled with this one. It felt like the mystery part of this book was more of a side plot instead of being the main reason for reading the book. I do love the idea of the bookmobile and of course anything with a cat I am all for, so I will be giving the next book in the series another chance.  For now I give this one a rating of Two Paws.
Posted by Angela at 9:57 AM