Welcome to Advent Reads!
This is an event I have had on my blog for several years running now.  Each evening I feature a different holiday themed book. Think of it as your Book Advent Calendar! I post a variety of holiday books including romance, children's, middle-grade, mystery, paranormal, and I try to find some that are other holiday celebrations than Christmas too. I hope you will stop by each evening to see what new book I have for you!

I have the pleasure of bringing you the next book in our Advent Reads in connection with the Harlequin 12 Books of Christmas Winter 2019 Virtual Tour! Thank you to both Harlequin and Pump Up Your Book for allowing me to participate and bring you our book for today! 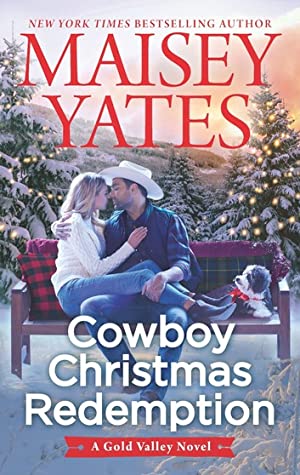 Synopsis: "He didn’t want to come home for the holidays—but can an unexpected reunion with a woman from his past make this cowboy’s Christmas merry and bright in this sweet and sizzling novella? When Cooper Mason left Gold Valley, Oregon behind him eight years ago, he told himself he wouldn’t be back. But when a Christmas promise sends him home to face his demons, he’ll find that not everything is as he remembers—especially family friend Annabelle Preston, who’s somehow morphed from childhood pest to full-grown, hot-blooded and oh-so-tempting woman. Growing up, Annabelle had built a lot of dreams around the ruggedly gorgeous Cooper—dreams she’s long ago learned to put behind her. Until a chance encounter with Cooper leads to a night neither can forget, and all the old feelings come blazing back to life. Now, Annabelle has a week to prove there’s more between them than a no-strings holiday fling…and with a little Christmas luck, she just might convince Gold Valley’s favorite cowboy to come home for good."

My Review: I have a clear soft spot when it comes to cowboy romances, and I really love holiday romance, so I was really excited to pick this book up. I honestly can't remember the last time I read an unrequited romance, and honestly, after reading this one, they may not be for me. I really enjoyed the characters, Caleb and Ellie; there is clearly a lot of history and backstory there. We do get filled in with a lot of that, even being the 8th book in a series, which as someone who hasn't read the rest of the series, I really appreciated that added information. I did feel like Amelia was more of a plot device to force contact than an actual character in the story, which made me a bit uncomfortable. I also found the constant internal turmoil each of the characters had to be a bit heavy for a holiday romance. I generally look for something a bit lighter during the season. With that said, if you are following the series, this feels like it could play big role in the series as a whole.

My Rating: I really struggled a bit with this one, during the holidays I reach more for light, quick and easy romances.  This one clearly had a lot of baggage with the characters.  While it didn't work for my current reading mood, it will certainly appeal to those who are looking for a good series with some problematic characters who grow and develop throughout the story.  I give it a rating of Two Paws and a Stump Wag.

Here is a little excerpt of the story to see if it is something you would enjoy as well . . .
“Caleb!” Amelia flung herself off his parents’ front porch and into his arms. He picked her up, and she wrapped her legs around him, clinging tightly to him. And then she leaned forward and kissed his cheek. She smacked her hand against his jaw. “Prickly,” she complained.
Something in his chest tugged. “Well, you caught me at the end of the day, squirt. I need to shave.”
She looked at him and wrinkled her nose. “Am I going to need to shave someday?”
He laughed. And he was surprised how genuinely light he felt in that moment. “Not likely. Your mom doesn’t have a beard, does she?”
“No,” she said, frowning. “My mom says that you have Christmas trees.”
“I do,” he said. “At least, they’re about to be mine. It’s going to be a whole farm of them.”
“I didn’t know you had Christmas trees on a farm,” she said.
“Well, you can. It’s where most of the Christmas trees from the lots come from.”
“I want to see them.”
He hesitated because he knew that if he took Amelia to see the trees, in all likelihood he would have to take Ellie with him. And really, spending time with Ellie and Amelia in the same space right now was strange and loaded.
“All right,” he said. “But only if your mom’s okay with that.”
“She will be,” Amelia said, full of confidence.
He set her down, and she scampered into the house.
“What am I going to be okay with?”
He turned around and saw Ellie. The sight of her just about set him back on his heels. She looked the same as she always did.
But that was the problem.
“Amelia wants to go out and see the Christmas trees,” he said. “I didn’t figure you would mind. I don’t mind taking her by myself, if you need to go home.”
She lifted her shoulder. “No. I don’t mind going up.”
She started to take a step toward him, and his gut tightened. Then the door opened again, and Amelia reappeared with her backpack from preschool, and another stack of old printer paper that his mother had given her to scribble on.
“Can we ride in Caleb’s truck?”
“Yes,” Ellie said.
“I’m sitting in the middle.”
A smile tugged at the corner of Ellie’s lips, and she narrowed her eyes slightly. The impish expression making his gut feel hollow, and effortlessly conveying that she had been hoping for the middle seat.
She was flirting with him.
Now, that, he hadn’t expected.
So maybe this whole making her wait thing was really going to work in his favor. 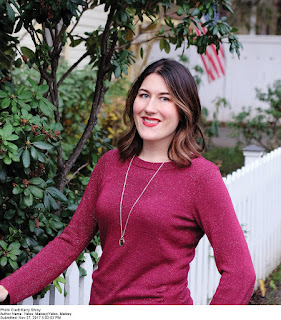 About the Author
New York Times and USA Today Bestselling author Maisey Yates lives in rural Oregon with her three children and her husband, whose chiseled jaw and arresting features continue to make her swoon. She feels the epic trek she takes several times a day from her office to her coffee maker is a true example of her pioneer spirit. In 2009, at the age of twenty-three Maisey sold her first book. Since then it's been a whirlwind of sexy alpha males and happily ever afters, and she wouldn't have it any other way. Maisey divides her writing time between dark, passionate category romances set just about everywhere on earth and light sexy contemporary romances set practically in her back yard. She believes that she clearly has the best job in the world.

Coming Home for Christmas is available now and you can obtain your own copy in print or digital format from Amazon or Harlequin's site.  You can also the other 12 Books of Christmas and many more recommendations on Harelquin's Website.
Posted by Angela at 6:00 PM