Review of Luin of Sapphire by Rich Feitelberg 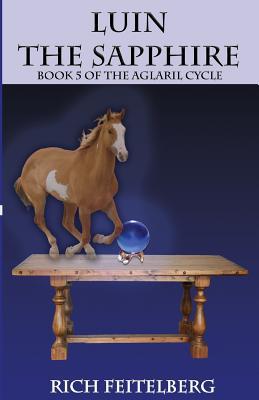 Read for: Recent Purchase & I am deeply involved in this series!

Reviews of Previous Books:
Aure the Topaz
Vorn the Onyx
Telep the Diamond
Calen the Emerald

Synopsis: "Evan Pierce, priest of St. Michael, and now Baron of Pennarth, must fight a group of necromancers, who have taken over the barony. With him are only a few friends from his religious order. Together, they must reestablish the castle guard, repair the castle defenses, and rebuild the nearby town of Irenrhod, if they have any hope of succeeding. But the dark mages, using the local guild of thieves, intimidate any who questions their authority. More stubborn people are visited by the mindless, animated servants of the wizards, dead corpses from the grave that can rend stone and flesh, and spread terror into the hearts and minds of everyone. How his opponents got so powerful that they can create a horde of zombies is a mystery to Evan. The Michaeline priest must discover the power source of the dark wizards and defeat them before the zombies destroy Pennarth and everyone in town is murdered."My Review: I have been anxiously awaiting this book after Evan went a separate way from the rest of the characters in book 3, he had become one of my favorite characters. For those of you have been following my reviews for a while may remember when I read the Game of Thrones series and how I ranted and raved about how GRRM jumped from POV to POV throughout the book with no consistency, well Feitelberg could have done that with this series to keep everyone's timelines together but he didn't and I for one am glad for it. I really enjoyed getting back into Evan's story, though he seems to have lost some of his appeal for me after discovering he was engaged and as a reader I had no inkling of it. I also found this book to be more plot driven than the rest of the series as opposed to character driven, we didn't get into Evan's head as much as I had hoped, oh we got his questions but not fully into everything else. That is not to say that I didn't enjoy the characters, I really did enjoy them and the development of both the story and the characters. We get more of a look at the 'evil' side of things and what their plans are, which of course I love, and we also get some new characters. One of my new favorite characters is a new power player who may make or break the prophecy. We are nearing the end of the series and I couldn't be more excited for the next book!

My Rating: I really enjoyed this book and found it to be a quick read, and with some new and interesting characters. I give it a rating of Four Paws!