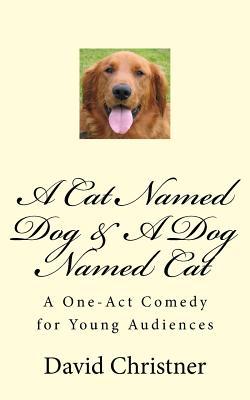 Synopsis: ""Cat" is a dog, a bloodhound and golden lab mix, living the good life on the rural south end of Whidbey Island in Puget Sound. "Dog" is a calico cat living under the same roof; she is aloof as cats are prone to be and a little on the wild side, keeping awful hours and dragging home her "trophies" from the ferry dock. Twelve-year-old Vicki Townsend loves both her pets dearly, but she shares a secret with "Dog" that "Cat" must never know. Never! When a mountain lion terrorizes the island, preying primarily on the island's domestic pet population for breakfast, lunch and dinner, Vicki's worst nightmare comes true: "Dog" is forced to reveal Vicki's secret to "Cat," bursting "Cat's" idealistic bubble and proving that something indeed is rotten in the State of Washington. After such a devastating revelation, will "Cat" swallow his pride, put aside his hurt and help rescue "Dog" from the jowls of the vicious cougar? Only time and "Cat's" keen sense of smell will tell."

My Review: I picked this book up at the RI Author Expo, I thought it would be interesting to change things up a bit with this play. It has been years since I have read one and I must say it was a really fun one. I would love to see this one done on stage, it would be great for a talent, or small act by a high school drama club or even a small theater group. It was light, a little comedy, a little serious, and a little drama. I loved the interaction between Cat and Dog, initially I thought I would have a hard time keeping them straight (being as the dog is named Cat and the cat is named Dog) but the personalities were captured perfectly.
My Rating: This was a fun play to read, I would love to see it acted out on stage.  It captures the personality of our beloved pets perfectly and has a little something for everyone.  I give it a rating of Three Paws.
I briefly met Mr. Christner at the RI Author Expo in December 2015, he is scheduled to make an appearance at the Author Meet and Greet at the Warwick Public Library on April 9th.  If you are unable to attend the event, you can find out more about David Christner and his work on his Website.
You can also purchase his plays and books through his Website. Or you can purchase a copy of A Cat Named Dog and a Dog Named Cat on Amazon.