Hello everyone, I hope you have been enjoying my month long feature of Rhode Island Authors so far. I also hope you had a chance to check out my review yesterday of a Children's book called Ducky Ducky Likes to Moo, because I have with me today the author and illustrator of that book, Eric Sturtevant! Eric has kindly opened some time in his schedule for an interview with me to share with all of you.  I also have a surprise for you at the end of the interview so be sure to check that out too.  Oh and I will have a review of Eric's other Children's Book, Hippo Hippo's Cranky Day, tomorrow.
So how about I get things started . . .
Ang: So what came first the art or the story? Did you start out illustrating with writing a book in mind?

Eric S.: The art definitely came first. I started my career as a "touring" artist in 2007 making a living traveling to different art festivals, selling my work as decorative wall art for children's rooms. Always wanted to write books but the inspiration didn't really hit until I became a parent. Now I rely on my daily experiences for story ideas.

Ang: Do you have a favorite character to draw? Do any of your characters talk to you when you are drawing them (I can just picture the giraffe saying that you forgot to give him a spot on his neck or the lion telling you he doesn't want to be king today and would rather be drawn in a field of wild flowers)?

Eric S.: I don't necessarily have a favorite character to draw. It's more so I like the process of creating a character from nothing. I really really love sketching a new character...breathing life into it so to speak. Every detail matters, from its eye shape to the size of its feet, hair, skin color....you're making these decisions as you put pencil to paper and making something that was once imaginary real. It's such a rush to step back and see a finished creation...to really feel like the design work is done. After that comes bringing depth and emotion to the character with movement and changes in position. All of this, in my opinion, is an answer to your question of if they speak to me. Not so much in a conversational way, but more so in how I feel as I create them. They sort of tell me if how I'm designing them is working or not. Hopefully that makes sense.

Ang: You stated on your website that you draw inspiration for your art style from cartoons, what was your favorite as a child? And what about the cartoons on TV now?

Eric S.: My favorites as a kid were anything Looney Tunes...Bugs Bunny, Daffy Duck, that sort of thing. Big fan of Woody Woodpecker, Mighty Mouse, Tom and Jerry. There was this terrific sarcasm to them and, in the case of Looney Tunes, real  social satire happening. I think the Simpsons does a great job today of picking up where the early  Bugs Bunny stuff left off. Lots of pop culture references and social commentary. I have to admit I'm way behind on today's cartoons. Save for the toddler stuff my daughter watches, I'm not at all up to date with what's on Saturday mornings now...or if Saturday morning cartons are even a thing anymore. I've completely dated myself with this answer.


Ang: It is clear from Hippo Hippo's Cranky day that you have drawn on some parenting experiences, what other experiences do you think you will write about?

Eric S.: That's definitely true. I have a whole series of early reader board books planned, with many different topics I hope to touch on that both children and parents can relate to. Lately a big "issue" in our house is patience, or the lack of coming from my daughter. She's 4 and its expected, but it's a daily struggle and one I'm trying to find the humor in. Have an idea for a story that I'm trying to hash out based on this.

Ang: Do you have any new books in the works? How long does it take you to illustrate and write a book?

Eric S.: So, yes, there are many more to come. It's usually a good three months of writing, illustrating and formatting the book in order to get it to look the way I want. Sketching is the longest process because, like I mentioned earlier, your pulling something straight from your imagination and it doesn't always want to cooperate. Once you get into the flow and things really start to click, its pretty magical what happens.


Ang: Since you just came back from vacation, what is a must see in Disney?

Eric S.: I have to say I was completely blown away by the experience. We celebrated my daughter's 4th birthday there and we had a ridiculous time. It's a bit of a cop out, but to answer your question I have to say all of it. Every ride or show we saw I walked out saying how the heck did they do that. That, to me, is a true measure of success and a major reason why that place works so well. I certainly can't deny the influence Disney has had on me as an artist. I know there are some out there who feel Disney is far too commercial and sort of over saturated, but walking around the park was an incredible experience because every language and nationality was represented by all the visitors. Disney's goal was to bring people from all over the world together and he certainly accomplished that. That's quite an artistic legacy.


Ang: Because this is Rhode Island Month on my blog, can you tell me your favorite fun thing to do in Rhode Island? Any special hidden place that tourists wouldn't know about?

Eric S.: I don't have any secret RI spots to recommend, but I will say one of my favorite places to go to is Roger Williams Zoo. We've had a family membership since my daughter was born and constantly go to walk around, observe the animals and really see the work they are trying to do to educate the public on conservation efforts and the need to protect animals. That's something that is very important to me.

Ang: Finally, as you say on your blog, you try to keep your book sales and interactions with fans personal instead of going through some large bookseller site.  Where can you be found next? Any events outside of the New England area in the future?

Eric S.: I'm starting to post my show schedule for the year as acceptances to art festivals come in. It's a nerve racking time of year because there is an application process for every show I participate in and there's no guarantee from year to year that you will be accepted. You have to wait until they notify you with the thumbs up or down. Anyway, I list them as I receive them. My next show is in April at Coventry High School. I'm always searching for new venues and new audiences to appeal to. It's a grass roots effort so its up to me to get the word out there and visit every town I can. I do a lot of shows outside of New England, including NY, NJ, Pennsylvania and Virgina/DC Area.

It changes from year to year but I travel often on weekends. It's hard work but very very satisfying..and it allows me to do something I really love.
If you would like to know more about Eric Sturtevant and his books or artwork you can find it on his Website and Facebook.
Eric Sturtevant is an illustrator and Children's book author who lives with his family in Rhode Island.  He creates unique and relatable characters and stories that he draws from personal experiences with young children and the cartoons that influenced him as a child. You can find him posting updates on Twitter @esillustrations and Instagram @eric_Sturtevant.  Also, be sure to check out his upcoming appearances on his schedule to see if he will becoming to an event near you!
Now I have a special surprise for all of you. Because Munchkin loved this book so much, I decided to purchase another copy of Ducky Ducky Likes to Moo to giveaway, along with an illustrated bookmark created by Eric Sturtevant! 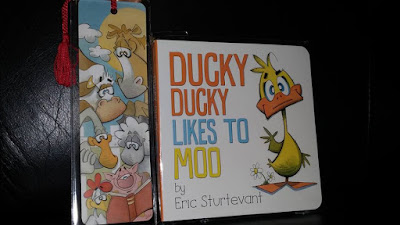 Of course with anything else we have rules
~You must be 18 or older to enter (though there is nothing adult included)
~Enter the giveaway via the below Rafflecopter methods
~This is open internationally too (any incurred customs fees are your responsibility)
~Giveaway ends midnight on the 29th, winners will be announced the next day (I will be contacting you via email after the announcement for shipping information)
﻿
a Rafflecopter giveaway
Posted by Angela at 8:00 AM