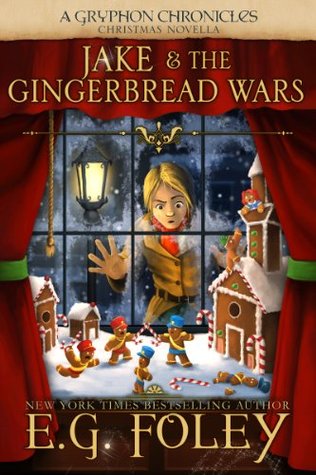 After his harsh beginnings as a rough-and-tumble orphan on the streets of London, Jake Everton takes his rightful place as the long-lost heir of an aristocratic family with magical powers – his personal quest, to follow in his slain parents’ footsteps as a Lightrider in the age-old battle of good versus evil. In the fantastical nooks and crannies of the Victorian Age, Jake and his friends (including his pet Gryphon) find no shortage of adventure – righting magic-related wrongs, solving supernatural mysteries, and exploring wondrous new worlds. Now it’s Jake’s first Christmas with his eccentric magical relatives, but trouble never takes a holiday…

Humbug hates being a Christmas elf. Instead of making toys, he’d rather make mischief. Angling for a new job in Halloween Town, he sets out to prove he’s frightful enough for the task by ruining Christmas for as many people as possible - until Jake and his friends capture him. The kids set out on a rip-roaring adventure to the North Pole to hand the troublemaker over to Santa and collect the reward. But the way is fraught with danger, leaving them to wonder if they’ll make it back in time for Christmas…or if they’ll even make it back alive!"

My Review: This was a fun little book for the holiday season. It is great for those Harry Potter fans or even those too young for it yet. It had a wonderful combination of fantasy, magic, adventure as well as several classic holiday stories and beliefs. It is said to be a stand alone book that can be part of the series, but it would definitely be helpful to read the first three books in the series first as some of the events that take place in those books are mentioned and the backstory on the characters would have been helpful as well, but it wasn't necessary to enjoy the book.
My Rating: This was a lot of fun to read, and gives you such a wide variety of ideas and genres in one little book. It may be a little advanced for young Middle Grade readers but I think they would still enjoy it. I give it a rating of Four Paws!