Review of Gearteeth by Timothy Black 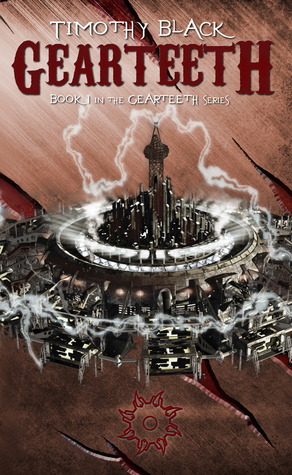 Read for: Requested Review
Synopsis: "“In 1890, a disease that turned sane men into ravenous werewolves swept through the United States like wildfire. On the brink of humanity’s extinction, Nikola Tesla and a mysterious order of scientists known as the Tellurians revealed a bold plan: the uninfected would abandon the Earth’s surface by rising up in floating salvation cities, iron and steel metropolises that carried tens of thousands of refugees above the savage apocalypse. The remnants of mankind huddled fearfully in the clouds, waiting for the werewolves to devour each other.

Yet, twenty years later, only one salvation city remains aloft, while the beasts still rule the world below. Time has taken its toll on the miraculous machinery of the city, and soon the last of the survivors will plummet to their doom. But when Elijah Kelly, a brakeman aboard the largest of the city’s Thunder Trains, is infected by the werewolf virus, he discovers a secret world of lies and horrific experiments that hide the disturbing truth about the Tellurians.

When the beast in his blood surges forth, Elijah must choose between the lives of those he loves, and the city that is humanity’s last hope of survival.”

My Review:  This is the first Steampunk book I have ever read, and it is a genre I have been curious about for a while now. It was a little difficult for me to wrap my brain around it at first, but once I developed an interest in the characters the story really pulled me in. There is obviously a lot of world building that takes place in this book but it is definitely a great kick off to a series, I am curious as to what will happen next in the storyline as it was left a little on a cliffhanger. It has a great combination of forcing you to think, emotional involvement, and a good dose of fear. There were definitely times late at night I just had to keep reading because it was just too heart pounding to stop. While I thoroughly enjoyed the book, it did take me until nearly halfway through to really get into it, I may not recommend this book to someone new to the genre but it would be great for avid Science Fiction and Fantasy readers.
My Rating: I really did enjoy this book even though it was difficult to get started, but as a fantasy reader I am used to pushing through some world building until the big picture finally forms in my imagination. I give it a rating of Three Paws and a Stump Wag.
Gearteeth was sent to me by the author in exchange for an honest review.
If you would like to learn more about Timothy Black and his work on his Goodreads Page or Website.
You can get your own copy of Gearteeth in digital or print formats from Amazon or in print format from Barnes & Noble