Graphic Novel Review of Zeus: King of the Gods by George O'Connor 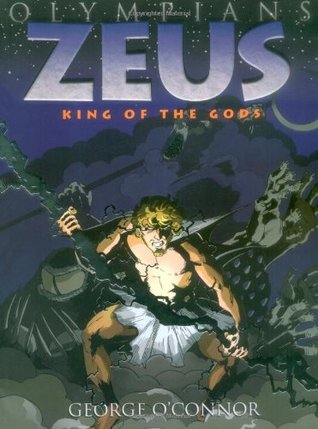 Synopsis: "George O'Connor is a Greek mythology buff and a classic superhero comics fan, and he's out to remind us how much our pantheon of superheroes (Superman, Batman, the X-Men, etc) owes to mankind's ORIGINAL superheroes: the Greek pantheon.

Volume 1 of OLYMPIANS, ZEUS: King OF THE GODS, introduces readers to the ruler of the Olympian Pantheon, telling his story from his boyhood to his ascendance to supreme power."

My Review: I am thinking that this Graphic Novel series definitely needs to be read in order. This first volume was not only about how Zeus came to be the King of the Gods but the whole origination of the Gods and fall of the Titans. I really enjoyed the story line and illustrations. There are extras in the novel as well including a family tree of the gods so it really helps to keep everything straight, at the end there are brief profiles (for lack of a better word) of the main players of this volume. I can not wait to read the rest of the series!!
My Rating: I really enjoyed this one and can't wait to get my hands on the rest of the series. I give it a rating of Four Paws and a Stump Wag!