Review of One Shark, No Swim by Lehua Parker 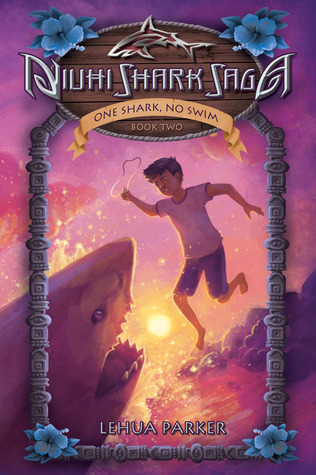 Synopsis: "There’s something bugging adopted Zader Westin, something more troubling than his water allergies where one drop on his skin burns like hot lava. It’s bigger than his new obsession with knives, designing the new murals for the pavilion with Mr. Halpert, or dealing with Char Siu’s Lauele Girlz scotch tape makeover. Zader can’t stop thinking about a dream, the dream that might not have been a dream where Lē‘ia called him brother then jumped into the ocean and turned into a shark.

Zader’s got a lot of questions, not the least being why he’s hungry all the time, restless at night, and why he feels a constant itch on the back of his neck. It’s making him feel like teri chicken on a pūpū platter, but Zader doesn’t want to think about chicken, not with his growing compulsion to slip it down his throat—raw.

With Jay busy at surf camp and Uncle Kahana pretending nothing’s happening, Zader’s left alone to figure things out, including why someone—something—is stalking him before it’s too late.

My Review: Now that I am comfortable with the language and writing style I really am getting into these books. This was a great follow up to the first book, 'One Boy, No Water' and was just as adventure packed, if not even more so. I liked that we got some more of other character's points of view and definitely a lot more back story. This is such a great book to get those young boys into books, and even young girls will enjoy this series. I will warn you the ending will leave you with a Wow and scrambling for a next book (which isn't expected to be published until this year). I will definitely be tracking this series and keeping it in mind for Munchkin as he grows up.
My Rating: This series just go better! I don't know if its that I am more comfortable with it or if the adventure is picking up.  I give this one a rating of Four Paws and a Stump Wag!
One Shark, No Swim was sent to me by the publicist for an honest review.
You can find out more about Lehua Parker and her work on her Goodreads Page and Website.
You can also purchase One Shark, No Swim in digital or print format on Amazon.