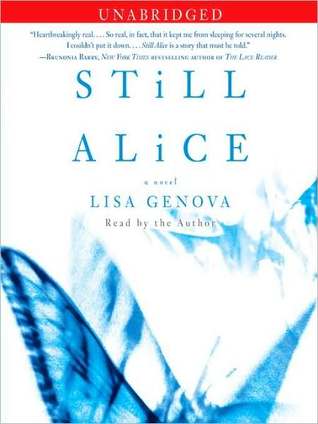 Synopsis: "This may be one of the most frightening novels you'll ever read. It's certainly one of the most unforgettable. Genova's debut revolves around Alice Howland - Harvard professor, gifted researcher and lecturer, wife,
and mother of three grown children. One day, Alice sets out for a run and soon realizes she has no idea how to find her way home. It's a route she has taken for years, but nothing looks familiar. She is utterly lost. Is her forgetfulness the result of menopausal symptoms? A ministroke? A neurological cancer? After a few doctors' appointments and medical tests, Alice has her diagnosis, and it's a shocker -- she has early-onset Alzheimer's disease.

What follows is the story of Alice's slow but inevitable loss of memory and connection with reality, told from her perspective. She gradually loses the ability to follow a conversational thread, the story line of a book,
or to recall information she heard just moments before. To Genova's great credit, readers learn of the progression of Alice's disease through the reactions of others, as Alice does, so they feel what she feels -- a slowly building terror.

In Still Alice, Genova, who has a Ph.D. in neuroscience from Harvard, uniquely reveals the experience of living with Alzheimer's. Hers is an unusual book -- both a moving novel and an important read.(Spring 2009 Selection)"

My Review: I have been recommending this book to everyone I have talked to since finishing it. Still Alice had such an impact on me, far more so than I ever expected. I appreciated the more clinical approach but it didn't loose any of the emotion. Alice's struggle was very moving and the speech she gives at the conference was unbelievable and one worth continuing through the book for the opportunity to read. I do however suggest that you get the audio version of this book, as I can imagine the written version may get a little mundane or monotone with out the voice inflection. I use to joke with my own mother about how at least when you have lost your mind you don't realize it, but I will never again joke about this, as I have followed Alice's struggle and gotten a tiny insight as to what victims of the disease go through.
My Rating: Everyone should read this book (or listen to it) even if it isn't in your usual reading genre or the subject isn't one you are necessarily interested in, you should still read it. I was so impacted by this book I can't help but give it a rating of Four Paws and a Stump Wag!