Graphic Novel Review of Joe the Barbarian by Grant Morrison 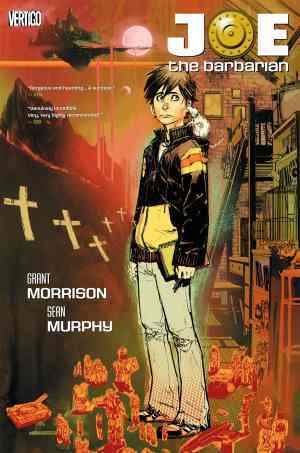 Synopsis: "Collecting the acclaimed 8-issue miniseries! Joe is an imaginative eleven-year-old boy. He can't fit in at school. He's the victim of bullies. His dad died overseas in the Iraq war. He also suffers from Type 1 diabetes. One fateful day, his condition causes him to believe he has entered a vivid fantasy world in which he is the lost savior—a fantastic land based on the layout and contents of his home. His desperate attempts to make it out of his bedroom transform into an incredible, epic adventure through a bizarre landscape of submarine pirate dwarves, evil Hell Hounds, Lightning Lords and besieged castles. But is his quest really just an insulin deprived delirium—from which he can die if he doesn't take his meds—or something much bigger?"

My Review: This gets rather confusing, you really need to know the premise of the story to understand what is going on. You can figure it out a little here and there but it really helps to read the synopsis first on this one. That said it is a crazy and fantastic adventure, though with a scary and sad premise. There are some big subjects tackled within the storyline including diabetes, foreclosure, loss of a parent and even bullying. I think this was a very interesting graphic novel, it may not be my favorite but still very well done.
My Rating: It wasn't my favorite because it was awfully confusing when bouncing around in his hallucinations. It still earns a rating of Two Paws and a Stump Wag.