Review of Harry Potter and the Sorcerer's Stone by JK Rowling 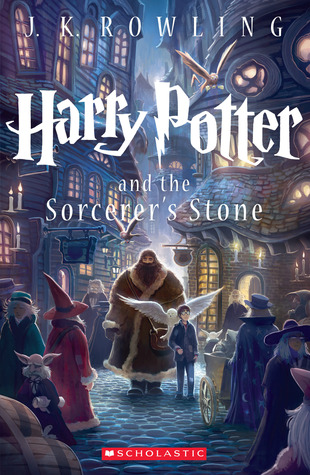 Synopsis: "Harry Potter has never played a sport while flying on a broomstick. He's never worn a Cloak of Invisibility, befriended a giant, or helped hatch a dragon. All Harry knows is a miserable life with the Dursleys, his horrible aunt and uncle, and their abominable son, Dudley. Harry's room is a tiny cupboard under the stairs, and he hasn't had a birthday party in ten years.

But all that is about to change when a mysterious letter arrives by owl messenger: a letter with an invitation to a wonderful place he never dreamed existed. There he finds not only friends, aerial sports, and magic around every corner, but a great destiny that's been waiting for him... if Harry can survive the encounter."

My Review: I know I am super late to this party, but I finally have the series in my hands so I can read it. I have to say I am a little disappointed. I really have no idea what all the hype was about and am totally confused. It was a fun book to read but not so outstanding that I would rave about it. It took me quite a while to get into the story and writing style, it was a little overly descriptive for my liking. I wasn't a fan of most of the characters. Harry Potter is just too much the underdog yet too perfectly able to accomplish everything. I did however really like Hagrid & Dumbledore. All that said, I was glad when the story started to pick up steam near the end, about the last 75 pages, but then again just as it got going it ended. It was an enjoyable read but not worth the craziness that surrounded it, but I will continue to read the series since I do have them all.

Note: I have also avoided watching the movies (I have caught brief glimpses but have not seen any of them all the way through) so that isn't swaying my review.
My Rating: It was really just a middle of the road book for me, it should have only taken me a day or two to read but it took over a week.  I give it a rating of Two Paws and a Stump Wag.