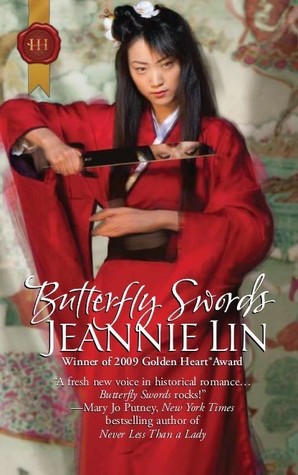 Synopsis: "During China's infamous Tang Dynasty, a time awash with luxury yet littered with deadly intrigues and fallen royalty, betrayed Princess Ai Li flees before her wedding. Miles from home, with only her delicate butterfly swords for defense, she enlists the reluctant protection of a blue-eyed warrior....

Battle-scarred, embittered Ryam has always held his own life at cheap value. Ai Li's innocent trust in him and honorable, stubborn nature make him desperate to protect her--which means "not" seducing the first woman he has ever truly wanted...."

My Review: It took me a while to get into this book because of the pacing and the character reactions. I don't claim to know much about the Tang Dynasty time period but I find it hard to believe that a female in that time period would act as Ai Li did, but that said I did get rather attached to her and Ryam and couldn't help but root for them. I did really like the role swords played through out the book and their training sessions were some of the best reading in the story. If your looking for a historical romance that isn't set in an European country, this would be a good selection, something just a little different.
My Rating: This was a real up and down book for me, I liked the historical aspects of it but feel the characters weren't really acting as if they were in that time period. Nonetheless I still really enjoyed the story and the characters. I give it a rating of Two Paws and a Stump Wag.