Review of A Blight of Blackwings by Kevin Hearne 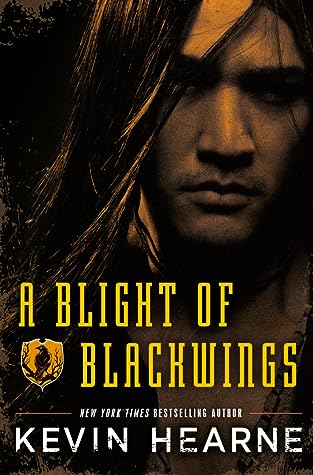 Review of A Plague of Giants

Synopsis: "SOLDIER AND AVENGER
Daryck is from a city that was devastated by the war with the Bone Giants, and now he and a band of warriors seek revenge against the giants for the loved ones they lost. But will vengeance be enough to salve their grief?

DREAMER AND LEADER
Hanima is part of a new generation with extraordinary magical talents: She can speak to fantastical animals. But when this gift becomes a threat to the powers-that-be, Hanima becomes the leader of a movement to use this magic to bring power to the people.

SISTER AND SEEKER
Koesha is the captain of an all-female crew on a perilous voyage to explore unknown waters. Though Koesha's crew is seeking a path around the globe, Koesha is also looking for her sister, lost at sea two years ago. But what lies beyond the edges of the map is far more dangerous than storms and sea monsters. . . .

In this sequel to A Plague of Giants, these characters and more will become the voices of a new generation bringing hope and revolution to a war-torn world."

My Review:  Since I read A Plague of Giants 2 years ago, this book has been on my most anticipated list, and it is finally here and I will start off by saying it was so worth the wait!! I am glad I took a bit of time in January to re-read the first book because this one picks up immediately where it left off. I am so glad we get to dive right back in with Dervan and Fintan as well as the overall story. We got some new character POVs which was great too, I love Olet's and you can't help but smile at Hanima's quirky and cheerful determination. While this book is clearly a transitional book, it doesn't suffer from that second book slump we see so often in trilogies. There isn't as much action as there was in the previous book but we get an opportunity to get to know the characters better when they aren't scrambling in life or death crisis' constantly. There are some great discoveries revealed throughout the telling of the story that will have you just as excited as the citizens are. Also, thank goodness for well made maps to help visualize where all the characters are throughout the story! And now I have to wait ages for the next and I believe final book.

My Rating: Even though there wasn't as much action in this book as there was in the first, I was still fully invested in the story. There are some great twists, some fantastic character development and great plot movement that just keep the pages turning.  I am beyond excited for the next and final book and I can't help but give this one a rating of Four Paws and a Stump Wag!

To find out more about Kevin Hearne and this series as well as his other books, check out his Goodreads Page or Website.   I also highly recommend joining his newsletter and following him on social media because he seems like an all around fun dude.

A Blight of Blackwings was just released on Tuesday, February 4th so you can obtain your own copy now in print or digital format from Amazon or Barnes & Noble or check at your local bookstore or library.  I also highly recommend the audio books for this series, they are complete with multiple narrators and voices and even the bard songs.