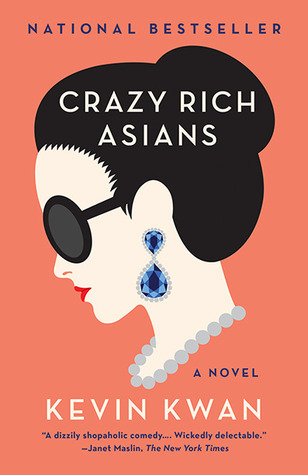 Read for: Recently Added & I wanted to see what the hype was

Synopsis: "When New Yorker Rachel Chu agrees to spend the summer in Singapore with her boyfriend, Nicholas Young, she envisions a humble family home and quality time with the man she hopes to marry. But Nick has failed to give his girlfriend a few key details. One, that his childhood home looks like a palace; two, that he grew up riding in more private planes than cars; and three, that he just happens to be the country’s most eligible bachelor.
On Nick’s arm, Rachel may as well have a target on her back the second she steps off the plane, and soon, her relaxed vacation turns into an obstacle course of old money, new money, nosy relatives, and scheming social climbers."

My Review: So I have been curious about this series, so many people have loved it and I kind of wanted to see the movie (but of course you have to read the book first). I had no idea how long this book was, I had expected a quick, light summer read but it was definitely more than expected. In a way it reminded me of the epic poems like Iliad and Odyssey with the amount of listing of names and family lines and dropping of designer and artist names and on and on about the description of clothes and jewelry. I realize that a big portion of the book rests upon the insane amount of extravagance of their lifestyles but it got to be a little too much. I did enjoy the characters we go to know, Nick, Rachel, Astrid, Collin, etc. With that said, there just was not enough movement in the plot for me, especially for how long this book was, and the ending was so lack luster for me. I don't think I will continue with the series, but I will watch the movie and I think I will be satisfied with that (less time to show the opulence).

My Rating: While I did like how the relationships shifted and changed throughout the book, I don't feel like it was quite worth all of this book. If it was at least beautiful, lyrical writing maybe but it was not.  I can only give this one One Paw and a Stump Wag.