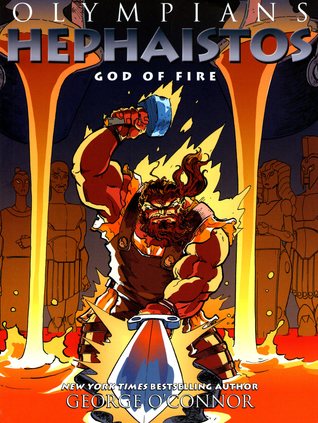 Synopsis: "Thrown from Mount Olympus as a newborn and caught by Thetis and Eurynome, who raised him on the island of Lemnos, Hephaistos had an aptitude for creating beautiful objects from a very young age. Despite his rejection from Olympus, he swallowed his anger and spent his days perfecting his craft. His exquisitely forged gifts and weapons earned him back his seat in the heavens, but he was not treated as an equal. His brothers and sisters looked down at him for his lame leg, and even his own wife, Aphrodite, was disloyal, Witness Hephaistos' wrath as he creates a plan that’ll win him the respect he deserves."

My Review: I have really enjoyed this series of Graphic Novels, but I have to say I was a little disappointed with this one. It was quite a bit shorter than the others in the series but I think there is so much more that could have been done with Hephaistos' story. Granted much we know about Hephaistos is interwoven into other myths but he does appear in many of them and I would have liked to see some of those brought up in this one. With that said it was still a great volume, I still love the art style and all the extras that are included in the back of the book. This has been such a great series of graphic novels that makes these myths approachable for many audiences.

My Rating: While I did really enjoy this one, I just felt like it could have had more to it. I am not an expert in mythology but I recall several more times Hephaistos was mentioned in myths and I would have liked to see a little more.  I still enjoyed it and appreciate it so am giving it a rating of Three Paws and a Stump Wag!