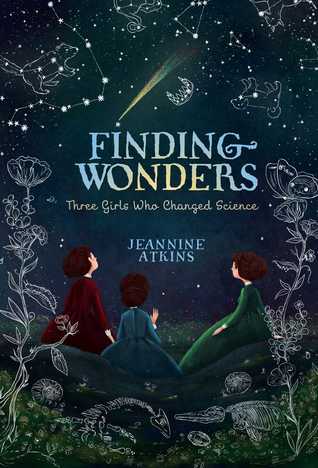 Synopsis: "A novel in verse about three girls in three different time periods who grew up to become groundbreaking scientists.

Maria Merian was sure that caterpillars were not wicked things born from mud, as most people of her time believed. Through careful observation she discovered the truth about metamorphosis and documented her findings in gorgeous paintings of the life cycles of insects.

More than a century later, Mary Anning helped her father collect stone sea creatures from the cliffs in southwest England. To him they were merely a source of income, but to Mary they held a stronger fascination. Intrepid and patient, she eventually discovered fossils that would change people’s vision of the past.

Across the ocean, Maria Mitchell helped her mapmaker father in the whaling village of Nantucket. At night they explored the starry sky through his telescope. Maria longed to discover a new comet—and after years of studying the night sky, she finally did."My Review: As soon as I saw this book I knew I had to get it. I love that it highlights not only 3 young female scientists but that they were making discoveries in time periods when it wasn't popular, even frowned upon. I did really like the way the book is written in verse, it adds a little something extra to the story when it flows so beautifully. While obviously not all details are known about these three women I think that Atkins did a great job of filling in the gaps. Definitely a great book to encourage those young curious girls.

My Rating: I really enjoyed this book, even though it is geared towards younger readers I think many people will enjoy it.  The only thing I wish had been different is I would have liked sketches or art similar to what could have been in their journals. I do find myself wanting to learn more about each of them too, which is really what I think the author was striving for in a way.  I give this one a rating of Four Paws.  And can we all just take a moment to enjoy this cover?!