Audiobook Review of Now We Are Six by A.A. Milne 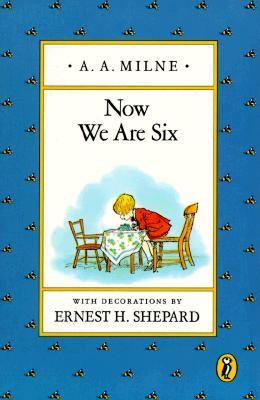 Read for: Mount TBR & Audio Books
Synopsis: "Everyone who has read Milne's original Pooh books knows that he can write a good hum, after all Pooh gives us several.
In this volume (and the earlier "When We Were Very Young") Milne's voice comes through more clearly, unmoderated by writing for his bear of little brain. He gives us a small volume full of poems that should surely last as well as his prose. While some of them are strongly flavoured by the time and place where he wrote them others are more universal in their subject and tone.
As you read this volume you will almost certainly come across something you recognise, if it isn't the line "James James Morrison Morrison Weatherby George Dupree" that catches your memory then it might be "Just a bit of butter for the royal slice of bread." If not, then you will find many of them sticking when you have read them to a child."

My Review: This book was a little similar to the 'Winnie the Pooh Book 3' in that was a bunch of rhymes and not really a story. The good part about this one is that it at least referred to and mentioned the familiar characters of the story. The rhymes were more Pooh-ish as well. It is short and sweet, though I wished for another story, this was still enjoyable and might be fun to have on in the background while playing other things.
My Rating: I liked that this one at least involved the characters of Winnie the Pooh, and the classic Pooh hums. Of course the classic narration voice of Peter Dennis really lends to the feel of the book. I enjoyed it just not as much as the first actual stories.  I give it a rating of Two Paws and a Stump Wag.