Each Monday (other than when special events are planned) I will review one book of the Magic Tree House Series by Mary Pope Osborne.
Book 5 of the series, Night of the Ninjas, dives back into the adventures with Jack and Annie. They encounter ninjas of ancient Japan and must use their skills to avoid the angry samurai hunting through the forest. 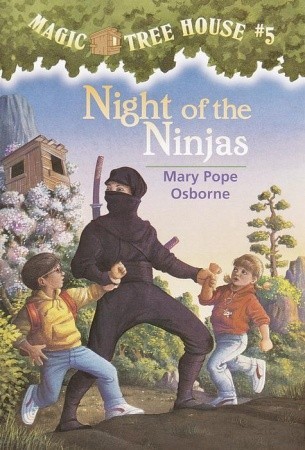 My Review: So obviously this series continued, even though the last book almost sounded as if it was intended as a conclusion. I don't know if there was a large gap between publishing dates, but this was the first time that there was a brief overview of the previous books at the beginning. This was back to how great the first one was though, they not only met ancient ninjas but learned a little of the history and lifestyle too. It was quite the adventure for both boys and girls.
My Rating: This brought back the excitement of the first book in the series and made me excited about it again.  I give it a rating of Four Paws!
﻿
Posted by Angela at 1:00 PM