I have decided to add a new post to my list of things that could happen on the weekends.  As part of my resolutions for 2015, I wanted to do more fun things with Munchkin and as a family.  I will be posting sporadically about some of the fun adventures we are having together.
So Munchkin is now 3! I have no idea where this time is going but it is now official. Since he announced several months ago that he wanted to be an astronaut we decided to have an outer space/ astronaut themed party.  Of course I had big plans that had to get cut down due to time but it was still a huge success.

As you may have already seen, I made a star tunnel for the party but I also made jet packs (I will have a crafty time post on how I made them another day). They were both huge hits with the kids.

We also had the rings of Saturn and a rocket launch.

I didn't get a chance to take a picture of the food but it consisted of Blast Off Mac & Cheese (with outer space shaped pasta), Planet Pizza, Asteroid Cheeseballs, Moon Cheese & Crackers, Sun Chips, Moon Pies, Milky Way Vanilla Pudding and of course Astronaut Ice Cream to go with the cake. I also lucked out and found space themed goldfish too. 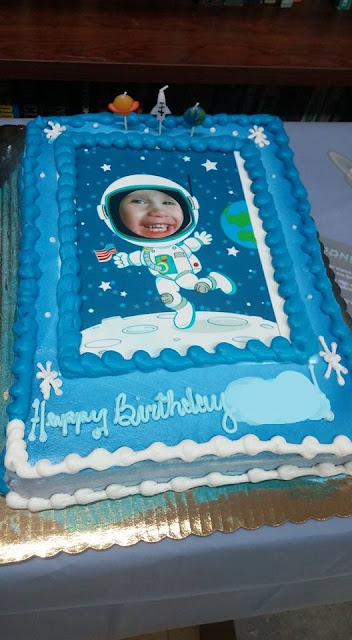 I think a great time was had by all!