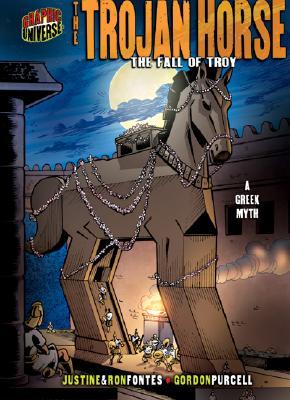 Synopsis: "For ten years, the battle raged. Thousands of ancient Greece's best warriors battled their enemies, the Trojans, in a desperate attempt to win back King Meneleus's beautiful wife, Helen. After a decade of fighting and thousands dead, the Greek forces suddenly fell back. Cautiously the Trojans ventured out of the city walls, where they discovered a giant wooden horse and a messenger. Should they accept this peace offering? Or is the gift horse too good to be true?"

My Review: I really enjoyed this graphic novel though the Trojan Horse was only a portion of it. It was a great overview of the Trojan War, though brief, from beginning to end. The artwork was great and suited the subject matter. All in all it was a great, and as said brief, overview of the war itself with some extra focus and the end result with the Trojan Horse.
My Rating: It was a brief over view of the progress and conclusion of the Trojan War but it accomplished a lot in a short graphic novel. I give it a rating of Three Paws and a Stump Wag.