Review of Chasing Dragons by Douglas A. Jaffe 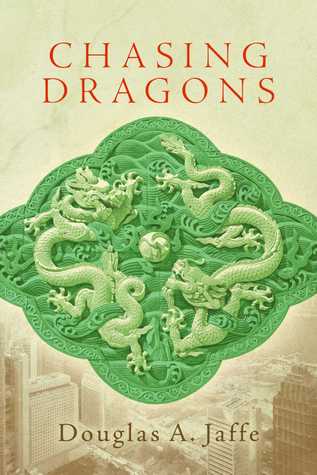 ﻿
Synopsis: "Sebastian is the owner of a bookstore café in Hong Kong who provides informal counseling services to an array of offbeat characters. His quiet life is suddenly upended when he meets Chloe, and their relationship takes a startling turn, as it begins to parallel the relationship of a pair of mythical dragons from Chinese history. The lovers struggle with questions of mortality and immortality, before a choice is made that pulls them apart.

From the safety of his bookstore, Sebastian observes the world around him through his books and his counseling clients, whose problems range from infidelity to the challenges of dealing with an overbearing mother. Living within the frenzied metropolis that is Hong Kong, Sebastian tries his best to live a quiet, predictable life.

Unbeknownst to him, there is a parallel story unfolding about Chi Wen and Zhao Chen, two dragons from Chinese mythology. While initially distinct from Sebastian’s modern life, this alternative reality begins to filter through and he finds himself increasingly subjected to visions and memories of a life he does not remember.

Sebastian has a chance meeting with Chloe one afternoon and they share an immediate attraction and familiarity that quickly draws them together. As the relationship deepens, Sebastian’s visions and dreams of Chi Wen and Zhao Chen intensify, and he begins to lose his grip on his sanity.

Reality and mythology blur and Sebastian is forced to question his own life and his relationship with Chloe. As the modern and mythical worlds start to intersect, Sebastian is drawn back into an ancient battle of wills. Solving the mystery of his frightening visions leads him to a choice that will throw his life into turmoil and potentially destroy his humanity."

My Review: This was an interesting book. I really enjoyed the Chinese Dragon and Mythology portion of this story. I don't really think I connected too much with the characters and it felt like there were a lot of sub-characters that were not needed, though some were very interesting and have stories all their own to tell. Of the two story lines occurring throughout the story I really preferred Chi Wen and Zhao Chen's story the best and I picked on some of the connections very quickly. However a good portion of Sebastian's story seemed like a philosophical debate, which I understand was part of building his character but I really didn't enjoy those classes in college and didn't care to revisit them. All that said Chasing Dragons has definitely rekindled my interest in mythology and the conclusion of the story was really unexpected and definitely unique.
My Rating: I am not entirely certain how to rate this book, I really liked portions and other parts not so much. I loved the idea and concept but could have done without so much debate and philosophy lessons. I think I will give it a middle of the road rating with Two Paws.
Chasing Dragons was sent to me by the author for an honest review.
You can find out more about Chasing Dragons and Douglas Jaffe on his Goodreads Page or Facebook
If this sounds like a book you may be interested in you can obtain your own digital copy on Amazon or Barnes & Noble
Posted by Angela at 8:00 AM