After Dark Review of About A Dragon by G.A. Aiken 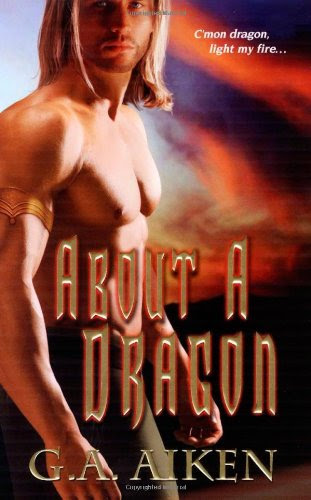 Synopsis: "For Nolwenn witch Talaith, a bad day begins with being dragged from bed by an angry mob intent on her crispy end and culminates in rescue by - wait for it - a silver maned dragon. Existence as a hated outcast is nothing new for a woman with such powerful secrets. The dragon, though? A tad unusual. This one has a human form to die for, and knows it.According to dragon law, Talaith is now his property, for pleasure...Or otherwise. But if Lord Arrogance thinks she's the kind of damsel to acquiesce without a word, he's in for a surprise...Is the woman never silent? Briec the Mighty knew the moment he laid eyes on Talaith that she would be his, but he'd counted on tongue-lashings of an altogether different sort. It's embarrassing, really, that it isn't this outspoken female's magicks that have the realm's greatest dragon in her thrall. No, Briec has been spellbound by something altogether different - and if he doesn't tread carefully, what he doesn't know about human women could well be the undoing of his entire race...

My Review: About a Dragon was even more entertaining than the first book in the series. I love the arguing and the banter between Talaith and Briec. But truth be told I fell in loved with Eibhear even though he was a sub character in development for later in the series. It was definitely an interesting turn of events to involve the gods and add some conflict, and there is some definite foreshadowing to more danger and adventures for more books!
My Rating: A great follow up to Dragon Actually, and leads me to the next books in the series without hesitation. I give it a rating of Three Paws and Stump Wag!﻿
Posted by Angela at 11:00 PM

Email ThisBlogThis!Share to TwitterShare to FacebookShare to Pinterest
Labels: After Dark, book review