Synopsis from Goodreads: "A powerful healer, she has sworn an oath of loyalty to Keir the Warlord, and his people. Now the Warlord and his chosen mate face enemies within the tribe and danger lurks on every hand as they journey toward Keir's homeland.

When they reach a village marked with the warnings of the plague, Keir forbids Lara to heal the sick, commanding that she not risk her own life. But both Lara and Kier are strong of will and neither will bend easily, even for love; and when Lara disobeys, she pays the price: both she and Kier are plague-struck... and so is their entire encampment.

In the midst of the dying, Iften, a rival warrior, gathers his followers and challenges Keir for the right to rule their tribe. If Keir, weakened by the sickness, loses — he dies.

And so does Lara.

To save her love, her life, and her adopted people, Lara must find a cure for the plague — and fully embrace her sworn role as Warprize to her Warlord."

My Review: A great followup to Warprize. The characters were just as endearing and easy to become attached to. While Warsworn wasn't as much of a exciting book in means of battle and assassination plots it was still riddled with suspense and drama. The descriptions Elizabeth Vaughan gives of the plague and their attempted treatments is what you could easily imagine happening in times without our modern day medicine. The journey doesn't end here, the book ends with still a few unresolved plot lines and some foreshadowing that you can't ignore! I am so thankful that I don't have to wait for the next book to be released!

My Rating: While this was a great book and needed for the series as a whole it wasn't my favorite but it still deserves a rating of Three Paws and a Stump Wag! 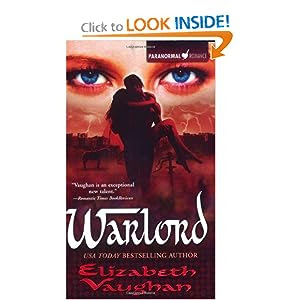 Synopsis from Goodreads: "Lara of Xy and her Warlord, Keir of the Cat, have been through much together. Lara abandoned her lands and people for love of him. She adopted his ways and learned of his tribe. Together they have faced plague and insurgency — and despite these struggles, they have known happiness and joy.

Now they face their most arduous task: Keir must take Lara into the Heart of the Plains, and introduce her as the Warprize to the warrior-priests. She must be tested—questioned, examined, watched—and must find favor with the warrior-priests and the tribe's elders before they will confirm her as a true Warprize.

But in Lara's heart there are doubts—for what if she is found wanting? Will Keir give up everything he knows to be with his Warprize?"

My Review: Warlord was possibly the best book so far in the series! It was filled with twists and turns that you wouldn't expect, it was great not to be able to predict the book like so many. I loved watching Lara grow into herself after being battered in the last book. Again the sub characters were just as well written as the main ones. You want to laugh and cry, shout and fight with the characters. Honestly there isn't a single thing I didn't like about the book other than the fact that it ended and I had to return to my own daily grind!

My Rating:  As I already said this was my favorite of the series so far, I couldn't put this book down! So how could I not give it a rating of Four Paws and a Stump Wag!
Posted by Angela at 11:55 AM