This week Deb on Booking Through Thursday asked

If you could see one book turned into the perfect movie–one that would capture everything you love, the characters, the look, the feel, the story–what book would you choose?

Geeze that is a tough one, I tried to think back to all the books I have read and one really sticks out in my mind.  Fire by Kristen Cashore, the scenes that I have in my mind are fantastic and with all the technology now the effects of the Monsters would be possible, and I would love to see the love/hate relationships of the characters develop.  The only way I would want this book in a movie though is if it was exactly as stated in the question, actually capturing everything the way it should be; because if it wasn't just right I think it would spoil what I have drawn up in my own imagination. 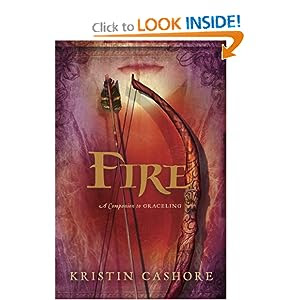 FIRE by Kristin Cashore "This fantasy, shot through with romance and suspense, is set in the same world as Graceling (Dial, 2008), but on the far side of the mountain barrier in the kingdom of the Dells. Here there are monsters, enhanced and exceptionally beautiful versions of various animal species. Fire is a human monster, so beautiful that she has to hide her hair for fear of attack by both raptor monsters and human men. She is able to enter other people's minds and exert power over them. It is a tumultuous time in the kingdom, as various lords are preparing to overthrow the king, and Fire is drawn into the fray. With a larger cast and a more complex canvas than Graceling, the story begins slowly and takes its time establishing itself. Fire's path is not immediately clear, and although full of action, her quest is largely internal. While the plotting is well done, there are a few quibbles about Cashore's world-building and about the role of a major character from Graceling, Leck. But, this is Fire's story, and readers will fall in love with her as she struggles with her pivotal role in the war effort as well as her complex relationships with her oldest friend and lover, Archer; with Prince Brigan, whose mind is closed to her and who becomes central to her life; and with her monster father's fearsome legacy. More adult in tone than Graceling, this marvelous prequel will appeal to older teens, who will not only devour it, but will also love talking about it." — From Amazon.com
Posted by Angela at 3:55 PM

Email ThisBlogThis!Share to TwitterShare to FacebookShare to Pinterest
Labels: Booking Through Thursday