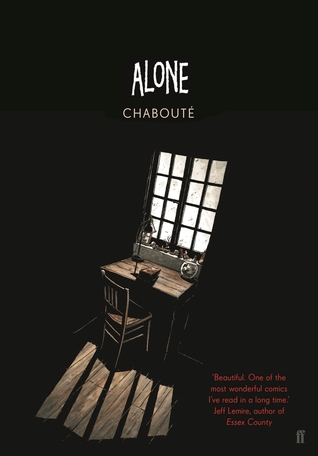 Synopsis: "On a tiny lighthouse island far from the rest of the world, a hermit lives out his existence. Every week a supply boat leaves provisions, yet the fishermen never leave their boat, and never meet him.
Years spent on this deserted rock, with imagination his sole companion, has made the lighthouse keeper something more than alone, something else entirely. For him, what lies beyond the horizon might be... nothing. And so, why would you ever want to leave? But, one day, as curiosity gets the better of him, a new boatman steps onto the island.
Intertwining tenderness, despair, and humour, Alone captures how someone can be an everyman, and every man is someone."

My Review: I loved Park Bench so when I saw this one available I had to pick it up. It wasn't what I expected but I loved how the story developed and the direction it took at the end. I love the illustration style of these graphic novels, using bold lines and monochrome colors. Where as the previous book was wordless, this one had quite a bit of dialogue, except for by the main character, and that really helped develop the stories. The story involves a lot of imagination by the main character, picturing things he has never seen and I found that element to be really creative and again added so much to the story and the connection to the character.

My Rating: I was expecting something much different from this one but was very pleasantly surprised at the different direction this took and the twists that were in the story. I really enjoyed it and give it a rating of Four Paws!