Graphic Novel Review of The Shadow Glass by Aly Fell 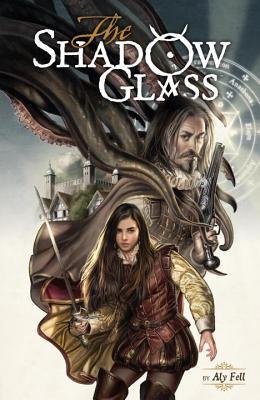 Synopsis: "A young student to England's greatest occultist learns her real father is in league with the devil. When Rose finds out that the man who raised her isn't her father, she ignores his warnings about the terrible secrets of her own past and seeks answers from childhood teacher Dr. John Dee, the queen's occult advisor."My Review: I randomly picked this one up due to the art on the cover. I have to say it was a bit obscure, I wasn't 100% sure what was going on until I got to the end. Apparently this book is written about a little known historical object and it contains real people and some real events with some fiction thrown in to fill out the story. Having known that now, it makes a little more sense as a historical fiction and why the story is really kind of incomplete. With all that said as much as the story didn't really appeal to me and didn't make a whole heck of a lot of sense as to what they were trying to do or who the characters were, the artwork in this book is amazing!

My Rating: The art is stunning in this book and that really made it worth it. I will say it is best to read the back of the book first in this one to kid of give yourself a starting place before jumping into the story.  I give it a rating of Three Paws.