RI Author Feature: Review of The Scot, The Witch and the Wardrobe by Annette Blair 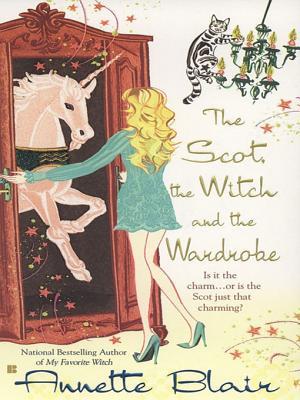 Read for: Mount TBR and RI Authors
Synopsis: "Despite her best attempts at denial—"I am so not a witch"—Victoria Cartwright has inherited a legacy of magic, along with the key to a mysterious wardrobe, in Blair's third Witch novel (following the bestseller My Favorite Witch). Upon her beloved grandmother's death, Vickie receives the magic key to grandmother's old wardrobe—never before opened—and a promise that it contains Vickie's destiny. To Vickie's puzzlement, her destiny turns out to be an exquisitely preserved antique carousel unicorn. Though it's oddly familiar to Vickie, the unicorn is recognized right off by Scotsman Rory MacKenzie, a handsome loner, when Vickie appears with it on a television antiques show. The unicorn happens to be the handiwork of Rory's ancestor and the key to ending his family curse. The two meet and immediately set to bickering, first over Rory's manners—Vickie quickly concludes that he's "a lack-wit shoddy-mannered Scot with more beards than brains"—then over his designs for the unicorn. Of course, they're just working their way toward confronting their mutual attraction, but sassy dialogue, rich sexual tension and plenty of laughs make this an immensely satisfying return to Blair's world of witchcraft."
My Review: Well it was better than the previous book in the series but it wasn't a great one. It was tolerable but not a book I would pick up again. It is hard to pinpoint exactly what I dislike. I have a feeling it might be the dialogue, at times it feels quick and disjointed, almost like a rough draft instead of a filled out final copy. At times the characters allude to something but you have no idea what it might be, you often feel like you are the new person in a group of friends sharing inside jokes.
My Rating: This was really a middle of the road one again. I am definitely drawing the line here on at least these types of books from this author.  I give it a rating of Two Paws.
﻿
Posted by Angela at 8:00 AM