Review of To Tame a Wild Heart by L.B. Shire 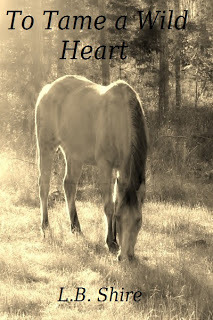 Synopsis: "Chancy Mallory is loyal to three things in her life: her horse Bowie, her parents and the Mallory Ranch.

Chancy is set on capturing a wild mustang colt to prove her worth to her father who believes the Mallory legacy died when he buried his three sons. When Nick Stone appears at the ranch, Chancy can't fight the waves of change. She fears her father's attentions are slipping out of her reach. And while before she thought only of horses and the ranch, her thoughts are now drifting to boys and kisses. Sweet kisses with Nick that is. Except he's her rival, or is he?

Nick Stone wandered west to avoid the lackluster future his father devised for him inside a stuffy bank in Boston, not to fall in love. He craves the wide open spaces Oregon has to offer. Heʹs learned in his travels that he has a special gift with horses. Especially those that have been tossed aside by others: the rogues, and the unwanted. With this gift, he makes a name for himself at the Mallory Ranch and causes friction with the ranch owner's daughter. Can he prove to Chancy he is a friend and not a foe? Can his gentle ways tame the ranch owner's daughter's wild heart?"

My Review: I enjoyed the story, though I wasn't able to connect with the characters as much as I would have liked to I did enjoy them. The story line was a little jerky at times, felt like a lot of stop and go, you would get into a rhythm and it would jump around a little again. I love the horse element, it really drew everything together for me. I found the setting and time period was clear throughout the story, the travel took a long time and was rough as it should have been. Be forewarned the ending is quite abrupt and I wasn't expecting a cliffhanger ending at all! This was a great coming of age story for Chancy, I think some tomboy girls would really love this one.
My Rating: This was a mediocre book for me, I enjoyed elements of it but couldn't connect the way I would have liked to with the characters. I give it a rating of Two Paws and a Stump Wag.