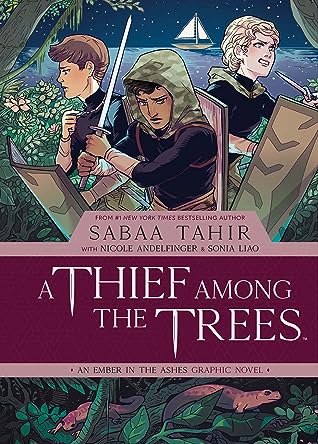 Read for: Graphic Novels/ Recently Added/ Love the Series
Synopsis: "New York Times bestselling author Sabaa Tahir joins writer Nicole Andelfinger and artist Sonia Liao for an all-new original graphic novel introducing the dangerous world of An Ember in the Ashes to new readers and revealing an untold story of Elias and Helene's beginnings at Blackcliff Academy in this stirring standalone chapter in the series' mythology. Before they were on different sides of a revolution, Elias and Helene were comrades at Blackcliff Military Academy. When they're sent on a dangerous mission to steal a heavily-guarded poison on Isle South, they soon find themselves up against surprising enemies -- including other recruits. As the true horror of their assignment is revealed, they will begin to confront the harrowing realities of Martial rule, their place in the system... and the choices they must make to survive."
My Review: I was really excited to see a little more in the Ember in the Ashes world, and a little more of the backstory with Helene and Elias. I struggled a bit getting into this book, maybe because it has been so long since I read the series. I did really like seeing the constant challenge between Elias and Helene for leadership but you can still see their friendship and loyalty. I also like seeing the beginning of Elias' questioning of the way the Empire is run and decisions are made. I don't think this is necessary to enjoy the series, but I also think it would be difficult to enjoy and follow without having read at least the first book in the series. It is a nice supplement to the series and one I am glad I did read, for a bit more backstory.
My Rating: I did enjoy this little bit of backstory for some of my favorite characters and I liked the illustration style, but I don't feel like it is a necessary addition to the series.  I give it a rating of Three Paws.
Posted by Angela at 8:00 AM