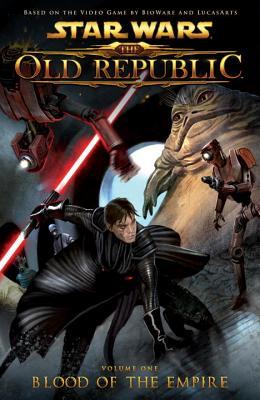 Read for: Graphic Novel Challenge
Synopsis: "After hundreds of years, the Sith Empire has returned to the galaxy, determined to crush the Republic that sent them into exile. For young Sith Teneb Kel, this is his only chance to rise above his lowly beginnings as a slave and prove his worth to the Dark Council. "

My Review: I have always been a fan of Star Wars and have enjoyed some novels in the past but this is my first attempt at a GN. While I really enjoyed the art and the various characters, it was a little confusing, it seemed like there were some jumps in timeline that weren't accounted for clearly. There is also some backstory that is missing even though I started at Volume One of this series, I guess I will have to see if there is another series I should have read previously. I did however enjoy the concept, the classic battle of good and evil both with in battles and internally.
My Rating: While this one wasn't quite up to par I will continue with the series to see where it goes. You have to start somewhere right?  I give this one a rating of Two Paws.