Review of Elixir by Ted Galdi 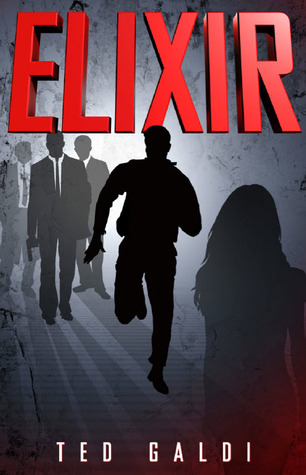 Synopsis: "Meet 14-year-old Sean Malone. He has an IQ above 200, a full-ride scholarship to one of the country’s top universities, and more than one million dollars from his winning streak on Jeopardy. However, Sean wishes he could just be normal.

But his life is anything but normal. The US government manipulates him, using him as a codebreaker in pursuit of a drug lord and killing innocent people along the way.

For reasons related to his personal security, Sean finds himself in Rome, building a new life under a new name, abandoning academics, and hiding his genius from everyone. When he’s 18 he falls in love. The thrills begin again when he learns that his girlfriend is critically ill and it’s up to him to use his intellect to find a cure, a battle pitting him against a multi-billion-dollar pharmaceutical company and the demons of his past.

Elixir is a story about identity, secrets, and above all, love."

My Review: This book was sent to me by the author for an honest review. I don't normally read a lot of suspense or thrillers but this one captured my interest. I honestly had to push myself to get through this one, it has a lot of potential but just fell a little flat. There is a lot of math and science involved in this storyline but unfortunately it is just brushed over (granted these are fictional accomplishments but still there should have been a little research involved to put some facts in the story). Without these elements, the whole suspense was lost to me. While I was definitely on Sean's side and that of both Natasha and Mary, the whole heart pounding element was lost. I also felt this needed a little editing, there were a lot of descriptive details that were not needed and simply pulled you out of the story once you did get going. There is a lot of potential for this one but just came up short.
My Rating: This was an intriguing book with a lot of brilliant ideas but just not enough detail to really draw you in and make you believe and feel.   I give it a rating of One Paw and a Stump Wag.
Elixir was sent to me by the author for an honest review.
You can find out more about Ted Galdi and his work on his Goodreads Page or Website.
You can also obtain your own copy of Elixir in digital or print format from Amazon or print format from Barnes and Noble