Graphic Novel Review of 1001 Nights of Snowfall by Bill Willingham 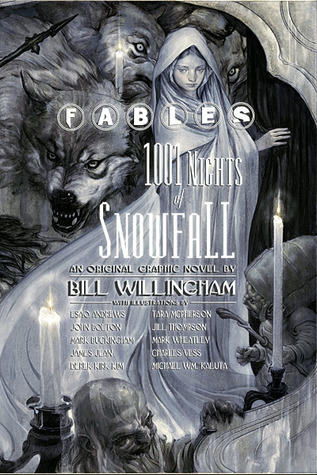 Synopsis: "Traveling in Arabia as an Ambassador from the exiled FABLES community, Snow White is captured by the local sultan who wants to marry her (and then kill her). But the clever Snow attempts to charm the sultan instead by playing Scheherazade, telling him fantastic stories for a total of 1,001 nights. Running the gamut from horror to dark intrigue to mercurial coming-of-age, FABLES:1,001 NIGHTS OF SNOWFALL reveals the secret histories of familiar FABLES characters through a series of compelling and visually illustrative tales"

My Review: I liked bits of this one and there were bits I didn't enjoy. I did enjoy the short stories that really gave you a backstory on some of the characters of the series, it was nice to get to know a little more about what makes them tick. The part I didn't enjoy was the pages and pages of text, as I have said before, I don't read GNs to sit there and read text, if I wanted to do that I would read a standard novel. Thankfully even with that issue, it was still a fast read with enjoyable illustrations.
My Rating: While this wasn't my cup of tea as far as graphic novel style goes, it is still a nice complimentary edition for the Fables series.  I give it a rating of Two Paws.