Graphic Novel Review of Hera: The Goddess and her Glory by George O'Connor 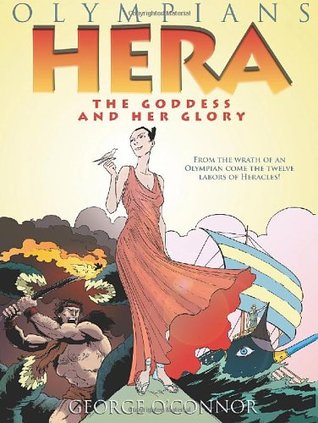 Synopsis: "The story of Hera, Queen of the Gods, and the heroes who won her favor.
Volume 3 of Olympians, Hera: The Goddess and Her Glory, introduces readers to the Queen of the Gods and Goddesses in the Pantheon. This volume tells the tales of the many heroes who sought and won Hera’s patronage, most notably Hercules.
In Olympians, O’Connor draws from primary documents to reconstruct and retell classic Greek myths. But these stories aren’t sedate, scholarly works. They’re action-packed, fast-paced, high-drama adventures with monsters, romance, and not a few huge explosions.
O’Connor’s vibrant, kinetic art brings ancient tales to undeniable life, in a perfect fusion of super-hero aesthetics and ancient Greek mythology."

My Review: This series bounced back from the slight let down of Athena: The Grey Eyed Goddess (Volume 2) with Hera. O'Connor does admit that Hera is a favorite of his and you can see that in how much was packed into this volume. Not only do we get to find out so much more about Hera and how she manages to dominate Zeus but we also get to watch Hercules' labors. It has definitely rekindled the urgent need to obtain the rest of the series (especially since my favorite is next, Hades)!
My Rating: After the slight let down this was like that first bit of spring air, when it smells like rain and not snow. I really enjoyed this one and can't wait to see what Hades has in store! I give it a rating of Four Paws.