Review of The Final Test by Dory Perlman 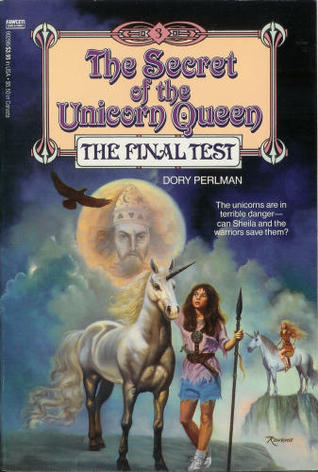 Synopsis: "When Mardock, the evil wizard, put a spell on handsome Prince Laric and his courageous warriors, he also invented a magical antidote that could only work during a lunar eclipse. Now, at last, that time is at hand in the enchanted kingdom of Arren. But someone must sneak into the wizard's underground laboratory and seize the magic formula ... that someone is Sheila."

My Review: I thought this third book was the most interesting so far, while it involved the unicorns still it branched out a little bit into Laric and his Eagle Warriors. I liked to see a little more of their involvement because they were just there to rescue the Unicorn Warriors when they got in a tight spot in previous books and didn't feel like they were treated as full characters. I also loved how Dr. Reit became a significant character as well. While this book would have made a great conclusion to a trilogy, the series continues on.
My Rating: This series is starting to really become a middle of the road one for me, but I did like the emergence from the background of some of the Sub-characters. I give it a rating of Three Paws.